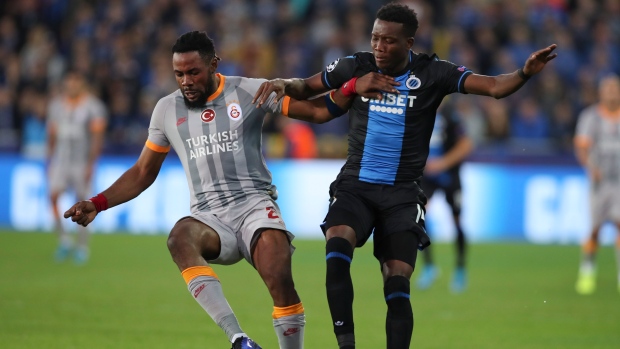 BRUGES, Belgium — Club Brugge and Galatasaray drew 0-0 in their Champions League opener on Wednesday, having to settle for a point each in Group A where Real Madrid and Paris Saint-Germain are favoured to advance.

Both teams had shots hit the top of the crossbar, from Brugge defender Federico Ricca in the first half and Galatasaray midfielder Sofiane Feghouli in the 61st minute.

The Turkish champion came close in the first half when Ryan Babel forced a good save from Brugge goalkeeper Simon Mignolet, who got a Champions League winner's medal last season as a Liverpool substitute.

Brugge, which advanced through two qualifying rounds as the first Belgian league runner-up to reach the group stage, is still unbeaten in 11 games this season.

Galatasaray ended a five-game losing streak in Champions League away games, though has now failed to score in five straight on the road.

PSG was hosting 13-time champion Madrid in a later kickoff Wednesday. In the next round on Oct. 1, Brugge travels to Madrid and Galatasaray hosts PSG.