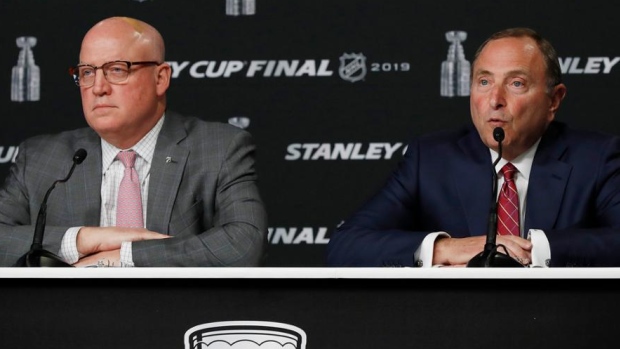 Now, two weeks after Aliu first revealed the incidents that ultimately cost Bill Peters his job in Calgary and prompted an investigation that has current Blackhawks assistant coach Marc Crawford on leave, we will begin to get a glimpse as to what change might be in order when the league’s top executives convene here for their annual Board of Governors meetings.

Perhaps most importantly, commissioner Gary Bettman and deputy commissioner Bill Daly will finally break their silence on the watershed events that have embroiled the game’s culture in controversy.

Instead, the NHL issued an unattributed statement that day calling the allegations against Peters “repugnant and unacceptable.” The league released another statement after Bettman and Daly met with Aliu on Dec. 3, reserving further comment until this week’s meetings, which includes all 31 owners or their designated representatives.

To this point, the NHL has not been specific, rather vowing for a “broader and thorough review.”

But according to sources, the NHL discussed a litany of potential changes during the hour-long meeting with Aliu, some of which could ultimately be implemented with Board approval this week.

The NHL does not currently have a Code of Conduct on the books for players, coaches and/or team executives.

However, the NHL is expected to propose this week the potential implementation of a comprehensive harassment and discrimination policy, as well as potential reforms for whistleblower and retaliation protection for players.

In order to encourage more diversity and inclusion in the sport and for fans, the NHL is aiming to “break the culture of silence,” according to a person familiar with the discussions.

“There is a feeling that real change could come from this,” the source said.

To accomplish these reforms, the NHL could potentially engage Aliu and other current and former black players to work in a collaborative manner.

NHL executive vice-president of social impact Kim Davis also figures to play prominently over the two days of meetings this week. Davis, a black woman, was hired by the NHL in 2017 after 30 years in the corporate world.

The NHL is apparently attempting to take a more holistic approach to the issue, since the discussion with Aliu was not isolated to his incident with Peters, but also about his experience at other levels of the game.

There have been numerous other racial taunts involving NHL players in both Canada and the United States this decade. Fans in Chicago chanted “basketball, basketball!” at Washington Capitals forward Devante Smith-Pelly in 2018. A fan threw a banana on the ice in London, Ont., in 2011 while Philadelphia Flyers winger Wayne Simmonds skated in on a shootout attempt during an NHL preseason game.

“I can guarantee you every single black hockey player has been called a racial slur at some point in their career, whether it's been younger or older,” Simmonds told reporters on Nov. 28 in response to Aliu’s revelations.

The only question is timing. Change may or may not come immediately on the heels of these Board of Governors meetings.

Any changes in policy or to the Collective Bargaining Agreement would likely need to be approved by the NHL Players’ Association and/or the NHL Coaches’ Association. Neither organization is expected to have a seat at the table in this week’s meetings.

Either way, it’s safe to say that Aliu has made meaningful social change an all-hands-on-deck item at the top of the agenda in what was otherwise shaping up to be an ordinary meeting.