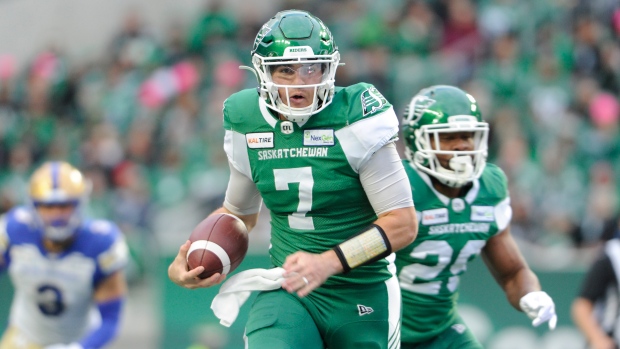 HC Craig Dickenson says QB Cody Fajardo will be the #Riders starter for the Western Final.

Says he’s had a full week of practice and they’re happy with his mobility. “If he’s not 100% he’s close.” #cfl @ctvregina pic.twitter.com/Gllq09i4Eu

Fajardo has been recovering from an oblique injury but Dickenson said he's had a full week of practice and the team is happy with his mobility.

"Today was a simple walk-through day so I didn’t have to push it and it gives me another day to rest. All things considered it’s feeling probably the best that I’ve felt since the injury."

“Hopefully adrenaline takes over and I don’t feel anything.”

While Dickenson confirmed Fajardo will start, earlier this week he brought up the possibility of backups Isaac Harker and Bryan Bennett also seeing time in the Western Final, should Fajardo not be able to play the whole game.

"Whatever it takes to win this game," Fajardo said, when asked if he would be okay to have a limited role. "And for me that’s something that I have to think about too. If I get out there and things aren’t going right, I have to be able to pull myself out of the game if I can’t get certain things done."

The 27-year-old Fajardo is a finalist for the CFL's Most Outstanding Player award after finishing the year with 4,302 passing yards, 18 touchdowns, and eight interceptions. Fajardo added another 611 yards and 10 touchdowns on the ground.

The Roughriders host the Blue Bombers in the Western Final Sunday at 4:30pm et/1:30pm pt on TSN1/3/4, with the winner advancing to the Grey Cup.