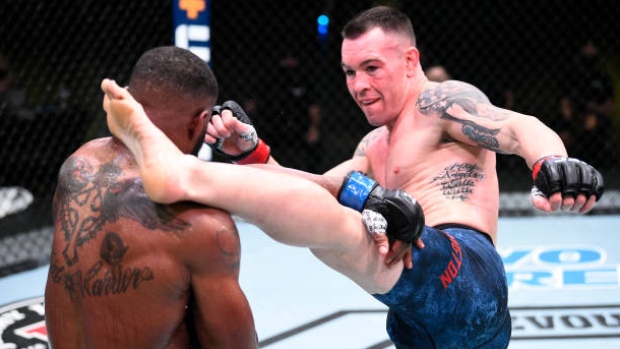 The UFC welterweight star defeated Tyron Woodley via TKO at 1 minute, 19 seconds of the fifth round Saturday night in the main event of UFC Fight Night in Las Vegas.

The finish was a bizarre one. Covington took Woodley down against the cage. While Woodley was going for a guillotine choke with Covington on top of him, Woodley screamed out in pain with an apparent injury.

With Woodley no longer intelligently defending himself, referee Dan Miragliotta stepped in and waved the fight off.

"I want my belt back!" Covington screamed at the finish. "Where's my f---ing belt?!"

All three judges had Covington winning every round, including all three scoring it 10-8 in what was a dominant fourth.

"[Woodley] got broken tonight," Covington said. "Just like I said I was gonna do."

Covington (16-2) had not fought since a fifth-round TKO loss to UFC welterweight champion Kamaru Usman in a title fight at UFC 245 in December.

UFC president Dana White reiterated at the postfight news conference that Gilbert Burns is the next contender for Usman. But White said Covington has put himself back in the conversation and that the UFC could look to pair Covington and Masvidal next.

"Colby, definitely, he's there," White said. "And the first fight was so incredible, him and Usman. I loved that fight. ... Maybe he fights Masvidal. We'll see if Masvidal wants that fight."

Covington said a fight with Masvidal would be his next preference if Usman is already booked.

"If I can't get the fair title fight, I want the best-friends-turned-enemies fight with Jorge Masvidal," he said.

Saturday's bout took place in front of no fans at the UFC Apex, a facility across from the UFC's corporate campus.

It was billed as one of the biggest grudge matches in the history of the UFC welterweight division. Covington and Woodley have a long history, including both once representing American Top Team. Woodley flew the younger Covington into his hometown of St. Louis as a training partner in 2014, and the two had a falling-out.

In 2017, with Woodley as UFC welterweight champion, Covington began targeting Woodley with crude trash talk and social media memes in an attempt to get a title fight. Woodley went back at him often. The rivalry fight was lined up for Covington at least three times between 2018 and 2020 but always fell apart for various reasons -- until Saturday.

Aside from the bad blood, the fight had a ton of meaning in the UFC's 170-pound division. Coming in, ESPN had Covington ranked No. 2 in the world at welterweight and Woodley No. 8.

Covington dominated much of the fight. He was able to suppress Woodley against the fence and work his clinch offense. Woodley was never able to deliver on his vaunted one-punch knockout power.

Covington didn't do a ton of damage to Woodley until the fourth, when he took Woodley down and sliced open a cut on his face with an elbow. But Covington was active throughout, pushing Woodley against the cage and landing body kicks as well as nice elbows and punches off the clinch separation.

Covington, 32, a Florida resident, has a new training situation at MMA Masters in Miami after a messy falling-out with American Top Team. He is a former interim welterweight champ. Covington had won seven straight before the Usman loss.

Woodley (19-6-1) is now on a three-fight losing streak. He dropped the title to Usman at UFC 235 in March 2019. Since then, he has lost to Burns and now Covington. Woodley, 38, was unbeaten in seven straight bouts before the past three. He once was considered one of the top welterweights in UFC history, with three successful title defenses.

White said afterward that he thought Woodley should consider retirement.

"Usman versus Colby is one of the best fights I've ever seen. This fight had that kind of potential if that [version of] Woodley showed up. He didn't," White said. "I think that [Woodley] should start thinking about hanging it up. He's had a great career; he's had a great run. He's made money."