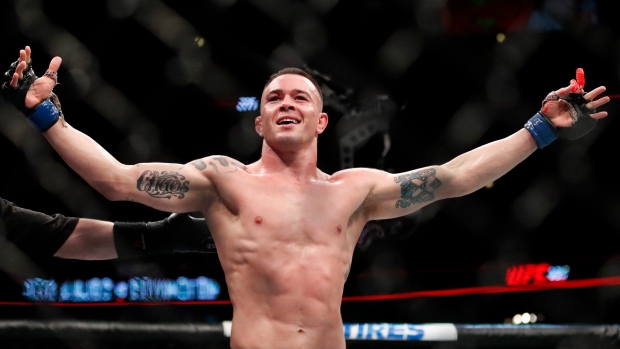 Former UFC interim welterweight champion Colby Covington is taking another detour on his way to a possible shot at the undisputed belt.

The first one was forced on him when he was stripped of the interim title after sinus surgery delayed his availability following his victory over Rafael dos Anjos at UFC 225 last June.

This second one is due to the promotion making an offer, including both an opponent and a level of pay, that Covington deemed to be acceptable.

The end result is that instead of an anticipated match-up with current champion Kamaru Usman in the fall marking the 31-year-old’s return to action, he’ll meet former champion Robbie Lawler on August 3 at Fight Night Newark, the fifth card on the main ESPN Network.

Perhaps it doesn’t matter if Covington’s next bout is for the gold, after all, he considers himself to be the welterweight standard bearer already anyway.

Aaron and Joe discuss The Korean Zombie's win over Moicano, Jose Aldo's contract extension, if Bare Knuckle Boxing is the perfect platform for boxer versus mixed martial artist contests and we are joined by Eric Spicely to discuss his return to the UFC, Joseph Benavidez on the future of the flyweight division and Colby Covington on why he accepted a fight against Robbie Lawler rather than waiting to face Kamaru Usman.

“I’m champ of the division, I’m going to defend my title and I’m going to get my championship pay,” Covington told the TSN MMA Show.  “It doesn’t matter who it is, if Marty Fakenewsman (Usman) doesn’t want to fight, if TyQuil Woodley (former champion Tyron) doesn’t want to fight me, business goes on as usual.  What a better fight to defend my title against than “Ruthless” Robbie Lawler, the last great champion of the division, besides myself.  It’s going to be a dog fight and I’m excited for August 3.”

While no official adjustments were made to Covington’s contract ahead of the Lawler fight, he says he  is being paid in the manner that was agreed upon prior to the fight that earned him his first piece of UFC hardware, despite the fact that he is no longer recognized as a title holder by the promotion.

“I wouldn’t say I’m getting compensated accordingly, but I’m getting my championship pay that I signed a contract before I beat (Rafael dos Anjos) to get,” said Covington. “The UFC knows they need to honour their word with me and the end of the day they know I put asses in seats and sell fights, so they are going to get an exciting performance and an exciting show.”

Covington also thinks that the title bout with Usman is being delayed, not because of an injury to the champion, but because his prospective opponent now feels like he has too much to lose to face him in the Octagon.

“There is also another side of it, that Marty Fakenewsman simply does not want to fight me,” said Covington.  “Anytime my name is brought up now he goes speechless and has nothing to say.  Before he fought Woodley and got that “Power Ranger” number one contender belt, it was ‘Colby we live 20 miles apart,’ and “I”ll do it for the American immigrants.’”

Lawler will head into the August 3 bout on a two-fight losing streak and having lost three of four fights dating back to the UFC 201 defeat at the hands of Woodley that cost him the title.  Despite being a veteran of 42 MMA bouts, Covington does not expect to see anything but the best from his opponent.

“Did you not see how he looked in his last fight with Ben Askren? His body looked completely different, he looked stronger and healthier than he’s ever looked and the thing about that fight that he had with (dos Anjos), that’s not really indicative of his skill set,” said Covington.  “He got dominated, but that’s because he tore his ACL in the first round, so he was on one leg the entire fight.”

“I don’t really take that fight into consideration, I’m not even looking at the film for that fight, that fight will fool you, he’s a dangerous fight and a scary guy.  I’m expecting the best Robbie Lawler that we’ve ever seen.”

For his part, Covington will enter the bout on a six-fight winning streak since suffering his only professional MMA loss, though he hasn’t competed since the dos Anjos victory in June 2018.  The California native thinks that layoff could cause fans to forget his accomplishments and that would be a mistake.

“People think I just talk, but they don’t realize that I’ve walked the walk my whole entire career,” said Covington.  “All this promoting, all this selling of the fight and just putting on an entertaining show for the fans year round.  It’s not just about when you fight in the Octagon, you need to put a smile in fans lives day in and day out when they’re going through their struggles.”

“There’s a lot of haters that I have and those haters forget that I can fight.  They think that I’m out with chicks just partying every single weekend, but they forget that there is an actual real champion that’s working hard every single day and chasing his dreams.”