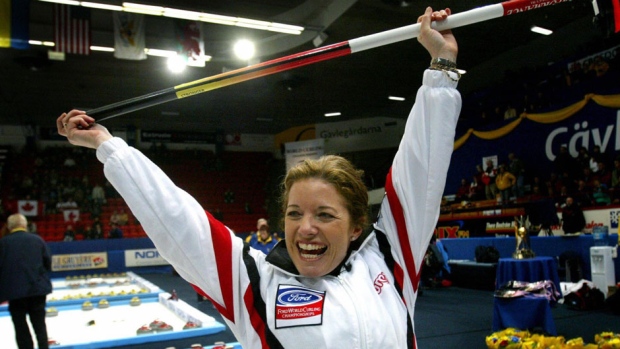 Luke Saunders will be making a return to the ice at the Canadian Mixed Curling Championships this week when play gets underway in Saguenay, Que., on Sunday. This appearance comes 26 years after his first trip, quite an accomplishment for a 25-year-old.

If that sounds a bit confusing, you’re right.

Saunders, you see, is the son of curling legend Colleen Jones. She was pregnant with him when she competed at the 1993 championship in Swift Current, Sask.

This time Jones will join her son on the ice this week, as she plays third and Saunders throws second stones for Peter Burgess. Lead Lindsay Burgess, the skip’s niece, rounds out the squad.

“I’m absolutely thrilled to be playing with Luke,” said Jones. “It’s kind of been my secret goal to play with him in a national championship.”

She also has two Canadian mixed titles to her lengthy list of laurels, including that one in ’93 when she was carrying her son.

Saunders may not have the experience of his mother, but he does have some curling chops, having played in a number of provincial finals in his home province. He was also a standout tennis player, competing for four years in NCAA competition with the University of Tennessee at Chattanooga.

Jones, who will turn 60 on Dec. 16, has been keeping her game sharp not only to play competitively at both the women’s and senior levels, but also to try and make the mother-son team a reality.

“I’ve been working hard and kind of make sure I can still be a player,” she stated. “And now that we’re here, we’re going to try and play as well as possible.”

The two also compete in mixed doubles but this week it’s all about the four-player game. Jones still has tremendous shot-making skills and she stated that Saunders is an exceptional sweeper, which can only help the Bluenosers.

“I can be light and tight this week,” she joked, knowing she can rely on her son’s push broom.

The Nova Scotia team isn’t the only one with familial connections at this year’s mixed.

Brother and sister Jamie Koe and Kerry Galusha will suit up for Team Northwest Territories, while a couple of husband-and-wife combos can be found with Wayne and Kim Tuck of Ontario, and Chris and Teejay Haichert of Saskatchewan.

But for a through-the-lineup family, it’s hard to beat the team from the Yukon. Thomas Scoffin skips the rink while his fiancée, Kim Brown, plays lead. The skip’s parents, Helen and Wade Scoffin, play third and second respectively.

The national Mixed championship started in 1964 and has been won by some notable curlers over the years including Rick and Lorraine Lang, Rick Folk, Jeff Stoughton, Kevin Koe and Jones. But in recent years, it’s lost some of its lustre to mixed doubles, especially since the latter format became an Olympic discipline.

In 2015, a world mixed championship was created, rekindling some significance to the four-player team format.

“Having a chance to go to a world championship is certainly a great opportunity,” said Jones. “It’s increased the importance, made it attractive.”

The national championship will feature 14 teams split into two pools of seven. Rinks will play a round-robin within their pool with the top four on each side advancing to the championship pool. They will then play against teams from the other pool, carrying their win-loss records with them. The top four move on to the semi-finals followed by the final next Saturday.