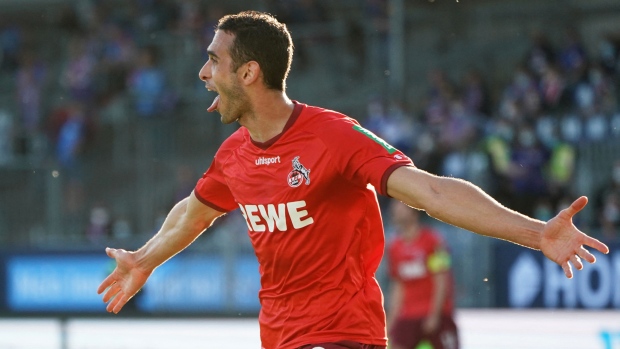 KIEL, Germany (AP) — Cologne kept its place in the Bundesliga on Saturday after recovering from a first-leg setback to beat second-division Holstein Kiel 5-2 on aggregate in the promotion-relegation playoff.

Kiel won the first leg 1-0 on Wednesday as it bid to reach Germany's top tier for the first time. But it was in trouble almost immediately in a frantic opening to Saturday's second leg, with three headed goals in the first six minutes, on Cologne's way to winning the second game 5-1.

Jonas Hector pulled Cologne level overall in the third minute with a looping header off Ondrej Duda's cross, but Kiel hit back 64 seconds later with Lee Jae-Sung's header on the rebound after a counterattack. That restored a 2-1 aggregate lead for the second-tier team, until Sebastian Andersson headed Cologne back in front two minutes after. At 2-2 Cologne had the advantage on away goals.

From there on it was all Cologne as Andersson scored yet another header in the 13th and Rafael Czichos blasted a rebound into the top corner to make it 4-1 on the day. Ellyes Skhiri scored the fifth late on.

Kiel looked to be showing fatigue in the later stages after a hectic finish to its season. Kiel had several games rescheduled in March and April after coronavirus outbreaks and had extra games with a run to the semifinals of the German Cup.

Cologne fired coach Markus Gisdol with six games remaining of the league season and hired the 67-year-old Friedhelm Funkel, a veteran specialist at relegation battles. His team won three of the next six to make the playoffs as Schalke and Werder Bremen became the two teams relegated automatically to the second tier. Funkel's job was only ever an interim appointment and he will be replaced by Steffen Baumgart for next season.

Kiel was German champion in 1912 in a regionalized playoff system but hasn't played top-division soccer since the Bundesliga was founded in 1963. Kiel's failure to beat Cologne means the only two promoted teams next season will be Bochum and Greuther Fürth.