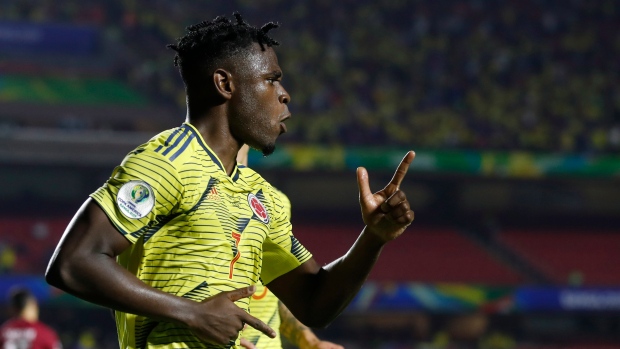 SAO PAULO — James Rodriguez again proved to be the key for Colombia in the Copa America.

With another great assist in a crucial moment, Rodriguez led Colombia to a hard-fought 1-0 win over guest Qatar on Wednesday, securing his team in the knockout stage of the South American competition.

Rodriguez came up with a perfect cross to set up Duvan Zapata's 86th-minute winner at the Morumbi Stadium.

Rodriguez had already been key in Colombia's impressive 2-0 win over Argentina in the opener, setting up Roger Martinez's first goal with a superb long pass from behind midfield.

After squandering many scoring opportunities and being held by a great performance by Qatari goalkeeper Saad Al Sheeb, Rodriguez helped Colombia break through the Qatari defence after finding Zapata making a run behind defenders inside the area.

Rodriguez used the outside of his foot to curl a well-placed cross to Zapata, who headed the ball over Sheeb and into the far corner, igniting the mostly pro-Colombia crowd of nearly 22,000 at the Morumbi.

"They played very defensively, relying on counterattacks," Rodriguez said. "We kept trying and in the end it was a fair result."

Colombia had dominated from the start but wasn't able to capitalize on its chances until Rodriguez finally combined with Zapata, who had also scored against Argentina.

"It's always like this when you have a team with the obligation to win and another which is very organized and that plays very tight on defence, not giving up spaces," Colombia coach Carlos Queiroz said. "If you don't score early, you are going to suffer. We won because Colombia played the way I like Colombia to play, fully focused during the 90 minutes."

Colombia had a goal disallowed for offside a few minutes into the match, and early in the second half it had a penalty kick reversed by video review.

Colombia reached six points from two matches in Group B, while Qatar stayed with one point. Paraguay, which drew 1-1 with Argentina later Thursday in Belo Horizonte, has two points, one more than Argentina.

The top two teams in each of the three groups advance, along with the best two third-place finishers.

Colombia closes group play against Paraguay on Sunday in Salvador, while Qatar takes on Argentina in Porto Alegre.

Qatar, making its debut in the South American tournament, had opened with a surprising 2-2 draw against Paraguay after trailing by two goals. The host of the 2022 World Cup remains with chances of advancing despite the loss at the Morumbi.

"We played against one of the best teams in the world," Qatar coach Felix Sanchez said. "Despite the loss, we competed until the final whistle. This will give us strength to keep working and preparing for the future."

The other invited team in this year's tournament is Japan, which is making its second Copa appearance.

Qatar will also play in next year's Copa America co-hosted by Colombia and Argentina. The other guest nation in 2020 will be Australia.