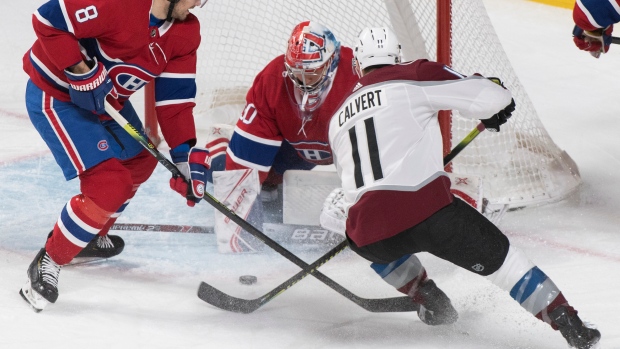 MONTREAL — Cayden Primeau did not look out of place on the Bell Centre ice.

The Canadiens goaltender stopped 32-of-35 shots in his NHL debut, coming up just short in a 3-2 loss to the Colorado Avalanche Thursday night.

The 20-year-old son of former NHL player Keith Primeau did his part to keep a struggling Montreal squad in the game against the league’s top-ranked offence.

“It was fun. There are so many words to describe it,” said Primeau, who was recalled from the AHL’s Laval Rocket this week. “It’s good to get the first one under the belt, at this level and at regular-season pace.

“I tried to give the team the best opportunity to win. You definitely have to step up your game when you’re facing guys at this level.”

The young goaltender was playing the first of a back-to-back, with Carey Price set to face the New York Rangers Friday night. Montreal (12-11-6) has dropped nine of the last 10 games.

Primeau, the 199th overall draft pick in 2017, came into the encounter with very little professional hockey experience — 12 games with Laval. With his parents watching from the stands, he quickly settled in after a slightly shaky first period.

“He was excellent,” forward Nick Cousins said of Primeau. “For his first game, he didn’t really show any nerves. That team over there is pretty deep, good off the rush, good on the power play. He held his own and gave us a chance to win.”

The Avalanche (18-8-2), winners of five straight, hardly looked like they were playing the second game of a back-to-back as they beat Primeau twice on 14 shots in the first period.

Colorado took a 1-0 lead at 6:13 when Ryan Graves tucked a rebound past Primeau, who failed to freeze the puck in the crease on Matt Calvert’s initial shot. Rookie defenceman Cale Makar started the play by driving hard to the net past Shea Weber down the right side.

Another rush down the right wing led to Colorado’s second goal, this time by Gabriel Landeskog. The Avalanche captain, back in the lineup after missing 16 games with a lower-body injury, blew past Jeff Petry and beat Primeau blocker side at 12:57.

Calvert made it 3-0 for the visitors with a short-handed tally on a 2-on-1 at 8:06 of the second following a turnover in the neutral zone.

“I liked what we did, we put ourselves in a position to win,” said Avs coach Jared Bednar. “We got some saves when we needed them. It was a good all-around effort by our team, especially on the road.”

Quality chances for Montreal were limited through two periods but Brendan Gallagher got the Canadiens on the board in typical fashion for the winger, a goal from the crease at 17:42 of the second after going hard to the net.

Cousins gave the home side new life with a power-play goal off the post and in 1:23 into the third against the league’s stingiest third-period team.

Midway through the third, Primeau kept it a 3-2 game with a sprawled-out stick save on Mikko Rantanen.

Montreal pressed for the equalizer with time winding down.

Backup goaltender Pavel Francouz came up big for the Avalanche with six minutes to play by stopping Artturi Lehkonen’s one-timer with the shaft of his stick. Francouz then denied Gallagher on a wraparound two minutes later.

The Avalanche backup, who made 38 total saves, also stopped a flurry of shots in the game’s final seconds.

Montreal was down a forward 90 seconds into the game when Jesperi Kotkaniemi fell awkwardly in the corner on a hit by Nikita Zadorov. The 19-year-old centre did not return. He will not travel with the team to New York.

“I don’t like it because one of (Zadorov’s) skates comes up behind his leg,” said coach Claude Julien. “It’s not your typical slew foot where you slide it underneath, but his leg goes up and he uses his upper body to flip him. That’s a dirty hit.

“I don’t know how the league’s going to see it, that’s up to them. Definitely suspendable move on his part.”