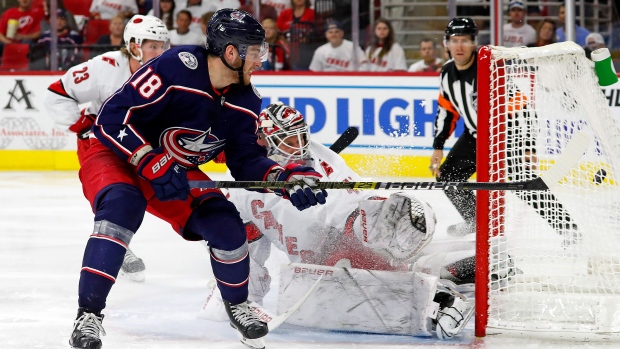 Carolina entered the game with a 5-0-0 record and had scored 11 goals in its last two games, but Joonas Korpisalo stopped 30 of 32 shots and the Blue Jackets used a disciplined defensive effort to win.

Dubois overpowered Brock McGinn on a rush from the opposite blue line and lifted a backhander past James Reimer, snapping a 2-all tie 75 seconds into the third period. Columbus made the lead stand up.

Ryan Murray and Alexander Wennberg each added two assists for the Blue Jackets.

Erik Haula and Dougie Hamilton scored for the Hurricanes, who didn't match the energy or discipline that Columbus displayed with both teams on the second night of a back-to-back.

"They (played) exactly how we thought they were going to play us, to a tee, and we weren't ready," Carolina coach Rod Brind'Amour said. "We didn't prepare properly as a group for that kind of game and we got what we deserved in my opinion."

Columbus, meanwhile, had a total of just eight goals in its first four games while posting a 1-3 record. The Blue Jackets didn't exactly break out on offence as Reimer stopped 32 of 35 shots in a strong effort in goal, but their defence kept Carolina's speed in check.

The Blue Jackets had their second-best regular season in club history in 2018-19 with 98 points and a 47-31-4 record, and they are eager to bounce back from a slow start.

"It was huge for us to get back on track," Murray said. "You don't want to fall into that hole, because once you're in that hole it's tough to get out. So we want to keep rolling and get some momentum going."

The result gave the Blue Jackets optimism heading into three straight days without a game.

"They should feel good about themselves," Tortorella said of the team. "Everybody contributed. We had some grind to our game. I think that's something that's been missing consistently in our game. It was there most of the night."

NOTES: Haula has scored in five of Carolina's six games and leads the team with five goals. ... All three Columbus goals came at even strength. ... The Blue Jackets are 6-2-2 in their last 10 games against Carolina.

Hurricanes: Open a four-game trip on Tuesday against the Kings in Los Angeles.