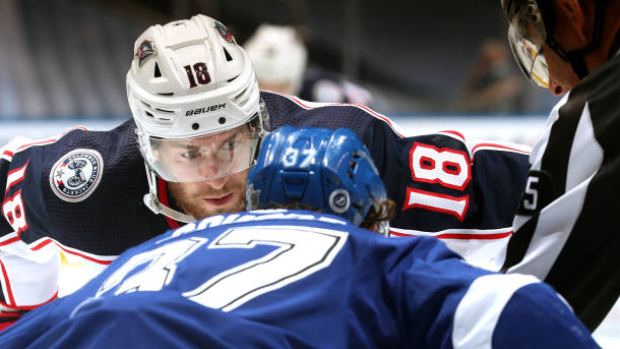 After benching the Pierre-Luc Dubois for the remainder of the game after the first period on Thursday, Columbus Blue Jackets head coach John Tortorella would not commit to dressing the 22-year-old for Saturday's game against the Tampa Bay Lightning.

Tortorella said he's still evaluating play and performance from Thursday's 3-2 overtime loss to the Lightning and will have to take injuries into account. He also expanded on his comments from Thursday night, when he said "the onus is on the players" to earn their ice time.

"I will not allow our standard of play and our culture and how we go about our business here to change," Tortorella said, per NHL.com. "We've got to keep on growing because that is how we have survived in this league in trying to be a better team in this league."

In addition, Tortorella would not confirm if Dubois is in or out of the lineup for the Blue Jackets game against the Lightning tomorrow afternoon. He said he's still evaluating a lot of things with the lineup outside of Dubois.

Dubois finished with just 3:55 of ice time in Thursday's loss, failing to see the ice after appearing to give up on a puck battle in the offensive zone in the first period. He said Friday he expects more from himself in the coming games.

"I hold myself to a high standard," Dubois said. "I know what level I can play at. There's not a lot right now that I am satisfied with. I know I can take a step up in every aspect."

"Whenever the next game is, I've got to step up my game," Dubois added. "I acknowledge that. I know it and I'm ready."

Selected third overall in the 2016 NHL Draft, Dubois has one goal and is minus-2 through five games this season.

It goes without saying that I think other teams have as well.
Now the question is which teams can satisfy what the CBJ want. This won't be a futures-only deal. I think Columbus wants this to be a hockey deal if/when they proceed.

After the Thursday's loss, Tortorella said it's up to the players to earn their minutes by playing "the proper way."

"I really don't make decisions as far as minutes. It's up to the player to show me," Tortorella said, per Fox Sports Columbus. "If there's one thing I'm pretty easy to read on is the minutes. You're going to get out there if you play the proper way. ...The onus is on the player. And it's on all players – not just the player we're talking about here that sat. It's all the players. I'm not a hard guy to read as far as that's concerned."

The 22-year-old centre requested a trade from the Blue Jackets after signing a two-year, $10 million contract in the opening days of training camp, but Tortorella said his request had nothing to do with being benched on Thursday.

"I've coached Luc like this for a couple years, as far as trying to get him to get some growth in his game and growth as a pro," Tortorella said. "Nothing changes here. ... I think you're asking the wrong guy. I'm just a coach trying to make it work with a hockey club, trying to find a way to win games. The person that you keep talking to me about, you should ask him."