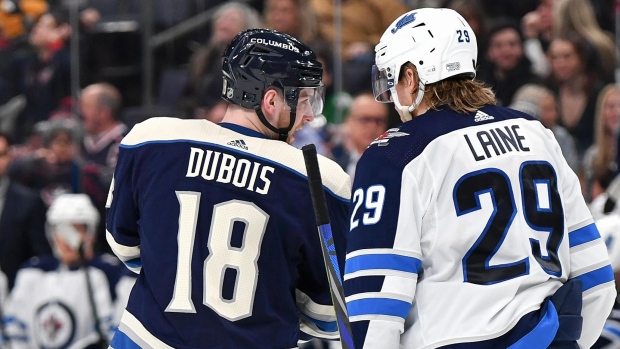 Rarely in NHL history have three unhappy players been traded for each other in the same transaction, a triangle of malcontents now flipped across borders in the hope that their frowns are turned upside down.

The Winnipeg Jets traded superstar Patrik Laine and centre Jack Roslovic to the Columbus Blue Jackets on Saturday in exchange for burgeoning centre Pierre-Luc Dubois, the player drafted directly after Laine in 2016, and a 2022 third-round pick. Winnipeg retained 26 per cent of Laine’s cap hit and salary this season to make the money work, leaving the Laine and Dubois part a dollar-for-dollar swap.

All three players made trade requests public - Roslovic as many as 18 months ago, Laine over the NHL’s offseason, and Dubois on New Year’s Eve as he inked a new two-year deal to start the season.

This deal is the closest the NHL will get to an NBA-style blockbuster, where players under team control regularly dictate their destination, a seismic shift from hockey’s norm.

This is a deal that was likely on the table for weeks. The Jets had long expressed interest in Dubois, whose father, Eric, is an assistant coach with the franchise’s AHL affiliate Manitoba Moose. It was hastened by Dubois’ relationship with coach John Tortorella unravelling for all to see during Thursday night’s loss in which Dubois was benched for the entirety of the final two periods - with Tortorella saying Dubois’ effort had “eroded.”

Blue Jackets general manager Jarmo Kekalainen fielded offers from 22 teams across the NHL on Friday, according to sources, including the Montreal Canadiens, Calgary Flames and Anaheim Ducks, before settling on Winnipeg.

There’s no doubt that Laine’s fiery, three-point first game of the season - his only showing since suffering a minor injury - helped grease the wheels already in motion.

“This was the right time for both parties to move in a different direction,” Kekalainen said of Dubois in a statement Saturday.

For the Jets, this was an exercise in asset management. Plain and simple.

Neither Laine nor Roslovic had a future on Canada’s prairies. Roslovic, a restricted free agent prior to signing a new two-year deal with Columbus, declined to even report to Winnipeg. The mercurial Laine was in the final year of his contract, requiring an expensive new pact that the team likely didn’t want to offer and the player did not want to sign.

Now, the Jets - who have been thin down the middle for a couple years - have two No. 1 centres in the fold with Mark Scheifele and Dubois.

Coach Paul Maurice will have no shortage of tantalizing options at his disposal once Dubois completes his required quarantine. With Dubois centering Nikolaj Ehlers on the second line, Paul Stastny can be shifted to the wing, and the intelligent Adam Lowry can continue in his third-line role. It allows for Maurice to load up when necessary, like Toronto and Edmonton do regularly, with Dubois on the wing on the top line or the top power play unit.

“We’re giving up an elite shooter that I firmly believe is going to develop into a strong, very powerful power forward," Jets coach Paul Maurice said. "And then we’re going to get a power forward that I think is going to develop into an elite point-producer. Different starting points. They’ll both get to, in my mind, at the end of their career the same place. They’re going to be big, powerful men that’ll drive play and drive offence.”

It’s the type of trade that a better balanced Jets lineup could help shift the balance of power in the all-Canadian North Division. Remember: Dubois wasn't far behind Laine in production the last two seasons: Laine collected 58 goals and 113 points, while Dubois had 45 goals and 110 points.

Dubois helped drive the Blue Jackets' playoff run last summer. He had 10 points in 10 postseason games, including a hat trick and four points against Toronto in the qualifying round and six points against the eventual Stanley Cup champion Lightning in the first round.

Plus, both Laine and Dubois are 22, but with Dubois signed to a two-year deal at $5 million per season that fits the team's cap structure, the Jets have gained an extra year of control of the player. (Dubois is under team control for four seasons, Laine was under team control for three seasons because Laine entered the league one year earlier.)

It's fair to say that neither of these organizations would have imagined this outcome when they selected Laine and Dubois at No. 2 and No. 3 overall in 2016. ​​It's like a plane crash - err, a Jet crash - where multiple points of failure on both sides in both franchises led to irretrievably broken relationships.

Still, there is risk in every trade.

The risk for the Jets is that Laine departs the 'Peg and becomes the Finnish Flash 2.0.

Painfully, Sunday marks 25 years to the day that Teemu Selanne scored his last goal in a Jets jersey. Like Laine, he exploded onto the scene in Winnipeg. Selanne scored a league-best 76 goals as a rookie; Laine netted 36 as an 18-year-old and followed that up with 44 in an electrifying sophomore season.

Laine leaves Winnipeg with 140 goals in 306 games, including the overtime winner on opening night. Selanne ended his Jets career with 147 goals in 231 games.

The problem is Selanne went on to strike 537 more times with the Ducks, Avalanche and Sharks in his Hall of Fame career.

Both were fan favourites, incredibly popular players in the market. No player has sold more jerseys than Laine in the Jets’ 2.0 reboot. But that popularity - which makes the trade so difficult for Jets fans to digest - mostly ignores the reality that was staring Winnipeg in the face in the near future.

And that’s the risk in this for the Blue Jackets.

Trading a top-flight centre for a winger generally doesn’t work out in a team’s favour. But Laine is far from an ordinary winger. He’s an elite game-breaker who is arguably the best pure shooter of his generation going to a team that has struggled to score goals.

“Patrik is a player we know very well and in a short time has become one of our league’s most proficient goal scorers,” said Kekalainen, the NHL’s only Finnish general manager, of his countryman Laine.

Beyond that, there is no guarantee that Laine meshes with Tortorella, or loves life in another NHL small market stop, or can even come to amicable contract terms with a Blue Jackets franchise that has notoriously wielded the CBA-enabled hammer to keep restricted free agent pay within their team structure. No Columbus player earns more than $5.8 million - and that now includes Laine with the salary retained by Winnipeg.

“We’re going to try to build a long-term relationship with him,” Kekalainen said.

They’re going to have to try, just like the Jets will with Dubois, in the hopes that this change of scenery is mutually beneficial.

Only time will tell.