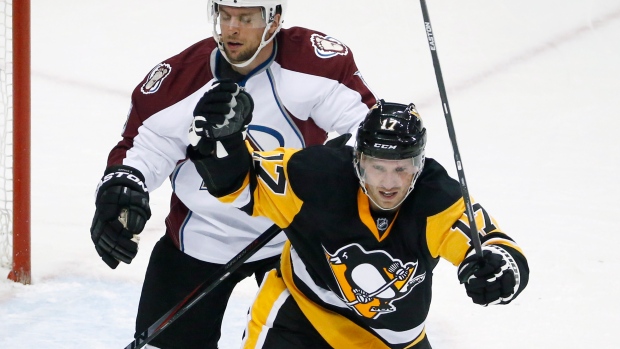 PITTSBURGH, Pa. - The Pittsburgh Penguins and captain Sidney Crosby hope that a recent bout with the mumps is a thing of the past.

Blake Comeau scored 2:24 into overtime to give the Penguins a 1-0 victory against the Colorado Avalanche on Thursday night.

Marc-Andre Fleury stopped 29 shots, registering his career-best sixth shutout of the season just hours after the Penguins thought their starting goaltender had the mumps.

"It wasn't the mumps," Fleury said. "Everybody goes through life with a cold here and there. It's no big deal. I felt good."

Fleury, who recorded the 34th shutout of his career, was tested after missing Wednesday's practice with an illness, but the results came back negative and he was cleared for Thursday's game.

Crosby did have the mumps and the Penguins' captain returned Thursday after missing three games. The Penguins, who managed two wins and five of a possible six points without their captain, now have six wins in their last nine games.

"I think, as a hockey player, you crave that routine and competing," Crosby said. "It's much better talking about hockey than that other stuff."

Comeau's goal was his 11th of the season. He tapped his third game-winner of the year past goaltender Calvin Pickard after Evgeni Malkin deflected Rob Scuderi's shot from the point in front. Malkin has points in six straight games.

"There are going to be times when goals are tough to come by," Comeau said. "(Malkin) did a good job of tipping (the shot), it popped out to me and I was at the right spot at the right time."

Pickard stopped 47 shots for the Avalanche, who lost for the sixth time in seven games and have one win in December.

"He played a really strong game for us and allowed us to be in that game," Avalanche coach Patrick Roy said. "Obviously, he was our star player."

Both teams were scoreless through two periods and Pickard, a rookie recalled from Lake Erie earlier this month, kept it that way with Pittsburgh pressing for the go-ahead goal. Pickard started the last four games and seven of the last 10 with Semyon Varlamov nursing a groin injury.

The Penguins spent most of the third in the Colorado zone, registering 19 of the first 24 shots of the period.

Crosby returned to practice Wednesday, skating for the first time since his diagnosis. Though Crosby missed a practice last week because of illness, the Penguins believed their captain wasn't at risk for the mumps after he received a booster shot prior to travelling to Russia for the Winter Olympics in February.

But the Penguins announced Sunday that Crosby had contracted the mumps — two days after pronounced swelling in his face forced him to sit out last Friday's home game against Calgary.

"It took a period to get used to the speed, but once you're in the game you start feeling more comfortable," said Crosby, who logged 20:19 of ice time. "I might be a little more tired than typically, but that's to be expected. You just kind of monitor it as you go along."

Forward Beau Bennett also was diagnosed with mumps, which has affected at least five other NHL teams, while backup goaltender Thomas Greiss and defencemen Robert Bortuzzo and Olli Maatta — both sidelined because of injury —are all being tested.

NOTES: Penguins' D Christian Ehrhoff left after the first period with an undisclosed injury. Avalanche D Brad Stuart became the 293rd player in league history and 100th defenceman to appear in 1,000 career games.Penguins' D Scott Harrington made his NHL debut on Thursday. The Penguins, for the fifth time, wore their third jersey -- a throwback to the black and yellow-gold colour scheme from when they won their first two Stanley Cups.Colorado continues a three-game road trip Saturday at Buffalo, while Pittsburgh hosts Florida.