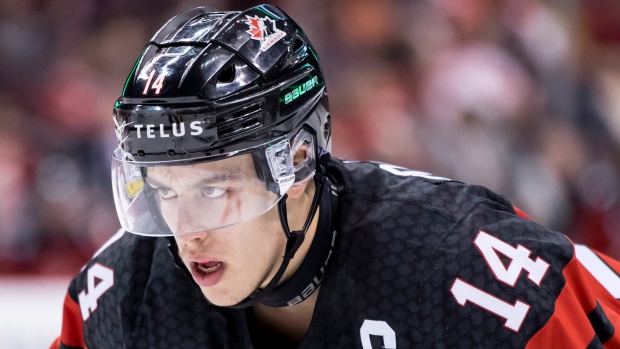 VANCOUVER — When Maxime Comtois first began shouting his Bruce Buffer-inspired, UFC-style pregame pump up in the tunnel, the rest of Team Canada didn’t know exactly how to react.

“I didn’t know what was going on,” forward Shane Bowers said. “I just looked and Max was yelling and everyone was kind of shocked.”

Comtois acting as Canada’s hype man was part of last year’s routine in the run to the gold medal in Buffalo. But Team Canada’s captain is the only returning player at this year’s tournament, so no one else was ready for it.

“This is the main event of the evening!” Comtois will roar tonight on TSN 1/3/4/5 and 4K. “A three-round World Junior matchup between Canada and Russia live from the Rogers Arena in Vancouver, B.C.!

“It's timmmmmmmmmme!” he will bellow, sending Canada onto the ice.

“I think the guys get a good kick out of it now,” Bowers said. “You see him come out and it’s only a matter of seconds before he starts chanting.”

It’s only weird if it doesn’t work, right? In the two tournaments Comtois has played, Team Canada has scored within the first six minutes of all seven preliminary-round games.

Comtois himself opened the scoring against the Czech Republic on Saturday night and setup the opener against Switzerland. He isn’t sure if his pump-up has anything to do with that, though.

Coach Tim Hunter is a big fan. Buffer approves, too. The legendary UFC announcer tweeted Monday saying Comtois’ imitation is “very cool.” No word on whether Comtois owes any royalties.

Hunter said he put the onus on Comtois and Canada’s leadership group to get the boys charged up.

“I’m not a cheerleader,” Hunter said. “I told them I’m not going to get you revved up before the game. I’m going to get you ready for the game, but you’ve got to get yourself in the emotional spot where you’re prepared to compete but not over the line. There’s a fine line.”

Team Canada is 19-8-2 all-time against Russia at the World Junior Championship. Canada will be without defenceman Jared McIsaac, who played the second-most shifts on Saturday among blueliners, as he serves a one-game suspension for a hit on Saturday.

Comtois’ pre-game anthem offers a peek behind the curtain as to why Team Canada chose him to wear the ‘C.’ Yes, he’s the only returning player from last year, but this roster has 11 players who captain their junior team. Comtois hadn’t been a captain since he was a kid.

Why didn’t Hunter rely on a player who done the job before? Because Comtois does it all.

“Right from the gritty things, getting the guys ready in the [stretching] activation before they get dressed, going out and managing warm-up, settling the guys down after warm-up and getting them all charged up before they go out,” Hunter said. “He’s played like a leader. He walks the walk. It’s impressive.”

Comtois has been arguably the best player in the entire tournament. He leads the team in goals (five) and is second to Morgan Frost in points with six. The 6-foot-2, 210-pound second-round pick of the Anaheim Ducks is a physical force.

Hunter, who was an assistant coach for the last two tournaments, said plainly that Comtois would not have been a candidate for a leadership role last season. He had developed a reputation as a player better suited for a supporting job who played his best when he wasn’t in the spotlight.

Comtois’ emotions frequently got the best of him, resulting in penalties. His maturity was in question, to the point that Hunter said coach Dominique Ducharme and manager Joel Bouchard “challenged him.”

“He’s been everything we wanted since,” Hunter said. “All these young guys mature at different rates. Every area he’s really come along. He’s a guy we’re really proud of.”

Canada vs. Russia is the one game on the schedule that neither team needs extra juice for. The challenge will be in harnessing that emotion in the biggest game of the tournament to date.

“I’m sure it’s going to be the loudest it’s been,” Bowers said.

“It’s going to be an amazing game,” Comtois said. “Lots of memories of big games against Russia and it’s amazing to be part [of it].”

It’s no shock that Comtois will be counted on to help keep things under control then, too.

“We want to be in control of the game,” Comtois said. “We did a pretty good job so far. Everybody is right on-board from the start.”