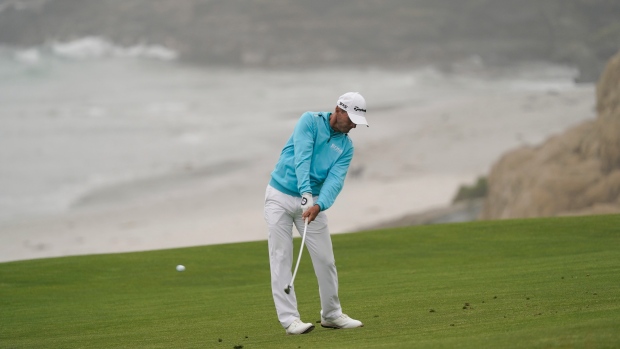 Mike Weir practises for the U.S. Open at Pebble Beach on Wednesday. , The Canadian Press

PEBBLE BEACH, Calif. – At 49, Mike Weir knows this will be his last time playing the U.S. Open at Pebble Beach.

If truth be told, a lot of fans didn’t even think he’d make it this time. But Weir is here and plans to be more than a ceremonial ball striker. He believes he can be competitive on a course that he calls his favourite in the world.

“It’s probably my last time playing a U.S. Open at Pebble,” said Weir on Wednesday as he made his final preparations. “I’ll probably be 60 the next time they come back. I was really excited. I wanted to come back here. I knew it was a course that would suit my game and one that I have a lot of confidence on.”

Weir has enjoyed a lot of success at Pebble Beach over the years. He tied for 16th back in 2000 when the Open was here. And he’s posted seven top-10 finishes at the AT&T Pebble Beach Pro-am, played over this same layout, two of those runner-ups.

But it’s been a while since the left-hander has contended in a tournament, major or otherwise. The last time he played one of the big four other than the Masters, where his 2003 win gives him an exemption, was the 2013 U.S. Open.

Weir has struggled through a host of surgeries and injuries, and battled to try and find the game that led him to eight PGA Tour wins. And finally, there are signs he’s coming around.

“I’m very confident in my game and secure in my game,” he said. “I feel like I’m in a place now where if I just do what I need to do, stick to my game plan and not pay attention to anyone else, that I can contend here and possibly do some great things.”

Three weeks ago at the Charles Schwab Championship, Weir made the cut. It was the first time in 1,746 days that he’d played on the weekend in a Tour event that wasn’t an opposite field tournament. It was a small step, but at least it was a step forward.

The day after that tournament ended, Weir earned a spot in the U.S. Open powering through the grueling 36-hole qualifier.

And last week at the RBC Canadian Open, Weir missed the cut by a single swing after playing some inspired golf in front of large galleries of supportive fans.

While the trolls on Twitter may doubt his future, he remains one of the most popular Canadian golfers of all time. His fan base is still immense and supportive.

Count Nick Taylor among them. He played the first two rounds of that national championship alongside Weir and said he was impressed with his game.

“He was hitting it really well, as good as I’ve seen in a while,” said Taylor, who is the other Canadian in the field this week. “Off the tee he was hitting it solid and that short game is still world-class.”

It’s easy to see Weir’s enthusiasm for this week. Pebble Beach inspires him not just for its remarkable views, but also what it demands from a golfer. It’s a far cry from most of the layouts the PGA Tour visits these days, most that favour strength over artistry.

“I think it’s just the variety of shots you have to hit out here,” said Weir, who will tee off at 7:29 PT on Thursday. “As an example, look at Bethpage. It’s a great course but you’re just hitting long shots into all the par 4s. Here you have a variety. You’re hitting every club in the bag. You get some wedges in your hand. You get some scoring opportunities if you drive it in the fairway. You have to think your way around. You have to be creative.”

That’s always been the strength of Weir’s game. Put a wedge in his hand and watch him go to work. Give him a short iron and watch him find a way to get the ball close. Let him putt on slick, slopey surfaces and he’ll make them from all ranges.

This week, Weir would love to find a way to get into contention. Maybe it won’t happen but if it does, it would be validation for years of hard work on the course and off.

“It would mean a great deal,” he said. “It’s been a long time coming. I’ve worked very hard to get back, on all aspects of my game. I think it will feel familiar. I’m ready for it.

“When it happens, whether it’s this week or down the road, I’m ready for it.”