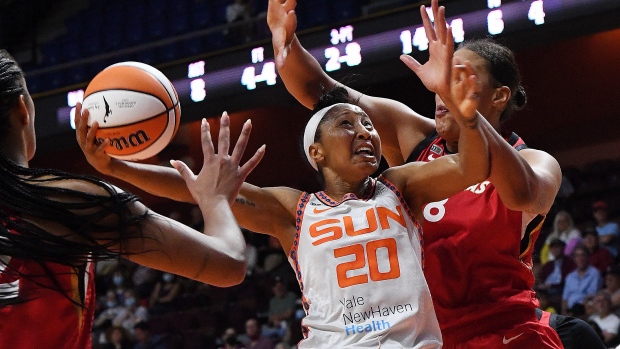 UNCASVILLE, Conn. -- — Briann January scored a season-high 19 points, DaWanna Bonner added 18 and the Connecticut Sun clinched a playoff berth with a 76-62 win over the Las Vegas Aces on Tuesday night in a showdown between the top two WNBA teams.

The Sun were up four to start the fourth quarter before Bonner scored the first four points and assisted on a Jonquel Jones layup to push the lead to 64-54 with 6 1/2 minutes to play. Bonner hit a 3-pointer and after a Las Vegas basket, January assisted on a Kaila Charles 3 for a 70-58 lead midway through the quarter. The Aces never threatened down the stretch.

Chelsea Gray scored 15 points to lead Las Vegas (17-7) and Liz Cambage and Dearica Hamby had 13 each.