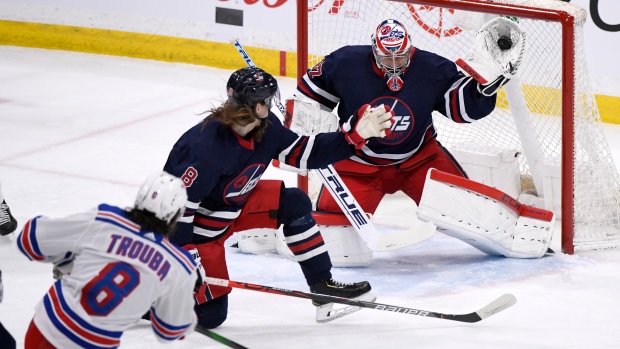 WINNIPEG — Connor Hellebuyck faced some of the best snipers in the league and stopped them all.

Hellebuyck stopped 34 shots to record his fifth shutout of the season as the Winnipeg Jets blanked the Washington Capitals 3-0 on Thursday night.

"The guys were battling really hard in front of me and were playing extremely well," Hellebuyck said.

Hellebuyck is now tied for the NHL lead in shutouts with Elvis Merzlikins of the Columbus Blue Jackets and Marc-Andre Fleury of the Vegas Golden Knights.

"I love shutouts," said Hellebuyck. "Tonight, great team shutout. I definitely love that on the resume, and it's fun seeing it."

Dmitry Kulikov, Kyle Connor and Mark Scheifele, with an empty-net goal, supplied the offence for Winnipeg (33-27-6). The Jets will play the Oilers in Edmonton on Saturday before returning home for a three-game homestand next week.

"He (Hellebuyck) was fantastic," said Scheifele, who extended his point streak to six games. "He's been fantastic for us all year. For him to get the shutout against a team like that is pretty special. It was a big win for our team. Now we have to look forward to a good game against Edmonton."

Ilya Samsonov made 30 saves for Washington (39-19-6) two days after the Capitals won the first game of the home-and-home series in the shootout 4-3.

Hellebuyck robbed Washington sniper Alex Ovechkin at least twice and made a great glove grab off recently-acquired forward Ilya Kovalchuk during a second-period power play. He also stopped forward Jakub Vrana on a breakaway early into the final frame.

"We know we can be better," said Capitals forward Tom Wilson. "And even when there's a good goalie in there, not scoring any goals isn't going to get the job done. You've got to find a way to get in front of him or make them more difficult or bear down on our chances. It happens."

Winnipeg won despite losing sniper Patrick Laine early in the first period. He blocked a shot with his left foot, left the ice and did not return. Jets coach Paul Maurice said tests had already been done and nothing was broken.

Scheifele was reunited with Blake Wheeler and Connor.

"It was awesome to be back with those two, and it was a good game," Scheifele said. "That's a good game, first and foremost. That's a really good team. They do everything well, so we had to make sure we did the right things every single shift. When you have a team like that, you can't give them any breath of life."

"I thought their goalie played well," he said. "That being said, I thought we could have made it more difficult with a little more net traffic and a little more net presence and delivered a few more pucks, and when we had the opportunity, make him go laterally.

"Some of the chances we had, we had some open nets and some breakaways and some opportunities and he made some good saves. So, sometimes, you have to give him credit. But I would have liked our chances to be at a higher number than it was tonight."

The Jets are now 6-2-1 in their last nine home games. They killed off all three penalties called against them and are 16 of 16 on the penalty kill in their last 10 games.