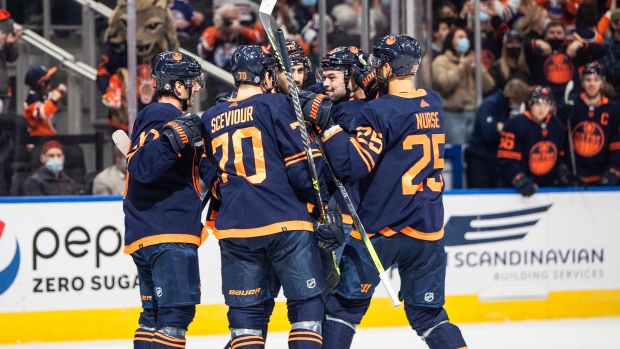 EDMONTON — The tide appears to be turning for Connor McDavid and the Edmonton Oilers.

McDavid scored the shootout winner and added a goal in regulation as the Oilers continued to dig their way out of a recent slump with a 3-2 victory over the Nashville Predators on Thursday.

“We’re starting to see some things in our game that we saw at the beginning of the year,” McDavid said. “I think guys are getting the confidence back and we’re getting the goaltending, Mikko (Koskinen) has been a rock back there.

"When he plays like that it makes our job easier Confidence is so big in this game. Either you have it or you don’t. It’s a big thing. It’s getting better and better. We’re getting momentum.”

Koskinen stopped all three Nashville shootout attempts and made 28 saves on the night.

“We are building our game and doing a lot of good things right now,” Koskinen said. “There is still a lot of room to improve and if we do that it is going to be a really strong team at the end of the year.”

Filip Forsberg and Matt Duchene scored for the Predators (27-14-4), who lost for the first time in four games.

“I thought we played pretty well. We didn’t give up too much,” Duchene said. “I would love to see the chances, I feel like we had a few more than they did, their goalie played outstanding, he made some big saves.

"Juuse (Nashville goalie Juuse Saros) did as well for us, both goalies were good in the shootout. And when you get to the shootout, it’s a bit of a coin flip, it’s a big of a skills comp, and our shooters, including myself, weren’t able to find one. That’s the way it goes.”

The Oilers tied an unfortunate franchise record. They allowed the game's first goal for the 11th straight contest when Forsberg scored his 200th career goal high to the stick side past Koskinen five minutes into the opening period. It was also the 26th time in 30 games that Edmonton has allowed the first goal of the game.

Edmonton got that back with 32 seconds to play in the first as McDavid blazed up ice and cut past defender Matt Benning before putting his 21st of the season through the Saros’ legs.

The Predators went ahead 2-1 seven-and-a-half minutes into the second period when Duchene elected to shoot on a two-on-one, notching his 21st high to the glove side past Koskinen.

The Oilers pulled even again with five minutes to play in the middle frame as a long point shot from Bouchard hit a defender and caromed into the net.

There was no scoring in the third, with Edmonton outshooting the Preds 43-26 through 60 minutes.

Overtime saw Darnell Nurse hitting a post for the Oilers.

The Oilers begin a three-game road trip in Montreal on Saturday. The Predators are off until Tuesday, when they will play host to the Vancouver Canucks.

Notes: The Oilers, who signed forward Evander Kane to a one-year deal earlier in the day, have also been getting some of their top players back in the lineup. Ryan Nugent-Hopkins returned from injury Tuesday, and Zach Hyman returned from COVID protocol Thursday… Still out of the lineup for Edmonton were Mike Smith (thumb) and Tyson Barrie (upper body)… Missing for Nashville were Dante Fabbro (upper body) and Eeli Tolvanen (COVID-19 protocol)… Predators 24-year-old forward Tanner Jeannot came into the game leading the NHL in rookie scoring with 13 goals and his team in hits with 141.

This report by The Canadian Press was first published Jan. 27, 2022.