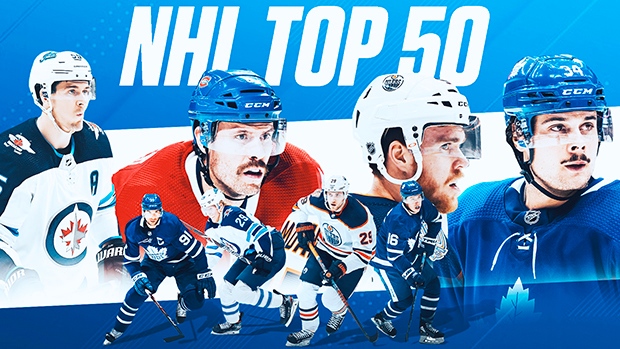 Connor McDavid’s sizzling first half of the season has only strengthened his grip on the title of the game’s best player.

The NHL scoring leader, McDavid is on track to set new career benchmarks in goals, assists and points - in addition to serving as a nightly human highlight reel - so it’s no surprise that No. 97 received 94 per cent of the first place votes in TSN Hockey’s first mid-season Top 50 ranking.

Colorado’s Nathan MacKinnon received the only other first place vote and finished as the definitive second choice.

Boston’s David Pastrnak (No. 3), Edmonton’s Leon Draisaitl (No. 4) and the Rangers’ Artemi Panarin (No. 5) round out the top five.

There is plenty of intrigue after the top spots.

With the mid-season Top 50 representing an assessment of performance this season only before the all-star break - not a projection for the second half - Sidney Crosby has been relegated to No. 22 as the Penguins’ captain missed 28 games recovering from sports hernia surgery.

Crosby has played just 22 games. No other skater on the list has played fewer than 33. Crosby has been his usual all-world self since returning Jan.14, collecting eight points in five games.

Crosby, 32, was ranked No. 1 in TSN’s pre-season Top 50 for seven straight years and has slid to the second spot the last three years under McDavid.

Goaltenders Tristan Jarry (No. 42) and Darcy Kuemper (No. 46) appear on the Top 50 for the first time. Winnipeg’s Connor Hellebuyck is the top ranked (No. 23) of six goalies to make the cut - and the only one to rise above the 40s.

Five of seven Canadian clubs are represented in the mid-season Top 50. Ottawa and Calgary don’t have any players on the list.

The Flames had four on the pre-season list: Gaudreau, Mark Giordano, Matthew Tkachuk and Sean Monahan.

Norris Trophy frontrunner John Carlson is the highest-ranked defenceman at No. 7.

Carlson’s teammate Alex Ovechkin fell from No. 7 on the pre-season list to No. 10, staring up at players like Pastrnak - whom he will attempt to chase down in the Rocket Richard race in the second half.