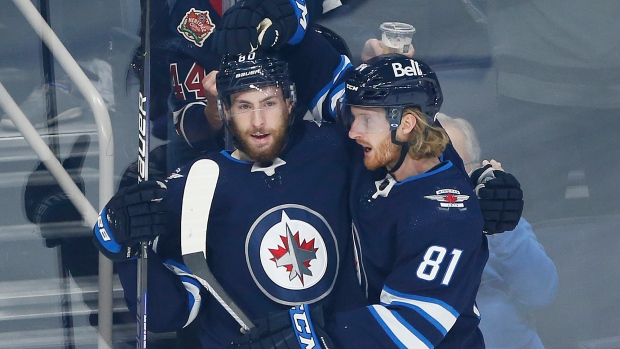 WINNIPEG — Kyle Connor experienced a first in his hockey career during the Jets' 5-1 victory over the Anaheim Ducks Thursday.

After Connor scored his second goal of the night, hats rained down on the ice as though the Winnipeg winger had tallied a hat trick.

“No, I've never seen that before,” said Connor, who added an assist in the Jets' first win of the season. “The rumour was it was free hat night, and they didn't like 'em so they were just throwing 'em.”

Wheeler was symptomatic, tested positive and began the NHL's minimum 10-day quarantine on Monday. Scheifele tested positive Tuesday but is asymptomatic. He needs to stay that way and produce two straight negative tests before returning to the team.

Pierre-Luc Dubois had a goal and an assist, while Andrew Copp and Josh Morrissey also scored for Winnipeg (1-2-1). Nate Schmidt collected a pair of assists.

“Obviously, when you go two guys down, two important players like (Scheifele) and (Wheeler), it’s an opportunity for others and I thought we did some good things, but I thought we can improve on it. We can play a full 60 minutes,” Dubois said.

Connor Hellebuyck made 38 saves for the Jets and Ducks goalie John Gibson stopped 22 of the 26 shots he faced.

Troy Terry scored for Anaheim (2-3-0), which was playing the third game of a four-game road trip.

Anaheim pulled Gibson with more than four minutes remaining in the third and Connor scored on the empty net with his second attempt. His first shot slid and hit the post, but his second try from the other end of the ice went into the empty cage at 17:11.

With Gibson back in net, Connor added his fifth goal of the season when he beat the netminder with a low shot with 1:14 left in the period and the hats flew onto the ice.

“Checked the card, made sure I hadn’t missed something,” Jets head coach Paul Maurice said of the hats. “But we appreciate the enthusiasm.”

Terry opened the scoring with a power-play goal at 2:46 of the first period, tipping in a Cam Fowler shot.

It was the eighth power-play goal Winnipeg had given up on 16 penalties tries this season.

“The shots were in our favour and we were creating offence, but that's when we got lazy with maybe our (play) or whatever the case is,” Terry said. “When you're playing these teams in the NHL, if you take a shift off here or there, they're going to make you pay. That's our next step.”

Connor, centre Dubois and Evgeny Svechnikov tied it up at 4:10, with Dubois deflecting in Connor's shot.

Copp gave Winnipeg a 2-1 lead 61 seconds into the second.

Anaheim had a pair of power plays in the middle frame, but this time Hellebuyck and the Jets' penalty killers held tight.

“He was huge for us, he’s going to be huge for us,” Copp said of the netminder. “We have all the confidence for him. I feel like usually one of those performances kick-starts a little bit of a run for him. We’re looking forward to seeing how he can take that and run with it for the next few games.”

The Ducks had a 27-19 lead in shots on goal after the second, but the Jets carried over a man advantage into the third and made good on it 1:30 into the period.

Morrissey's shot from the point went past Gibson on the stick side with 14 seconds remaining on the power play.

“Winnipeg is a dangerous team,” Anaheim head coach Dallas Eakins said. “If you leave something a little too juicy they’re going to put it in your net. So I think it was a great lesson in that."

Winnipeg hosts the Nashville Predators on Saturday, while Anaheim visits the Minnesota Wild the same night.