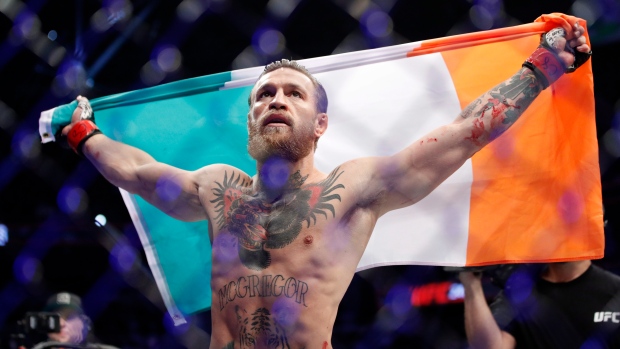 Last January, former UFC two-division champion Conor McGregor declared the beginning of his 2020 season. After a victory over Donald Cerrone at UFC 246, his year, like everyone else’s, was derailed by the COVID-19 pandemic.

It’s the first month of a new year and McGregor is ready to return to the Octagon as he faces a familiar opponent, Dustin Poirier, in the main event of UFC 257 this Saturday.

The 32-year-old is a man of many pursuits - he has a fighting career, successful business ventures and a growing family. With many different possibilities at hand, how did McGregor make use of his time during lockdown? By giving his all across the board, naturally.

“One hundred and 20 per cent to each one, I got lost in my practice, I got lost or maybe found in my family and then my business? I put an insane amount of work into my business,” McGregor told TSN. “I had nothing else to do and there was a lot of uncertainty around the world and I made the most of it.”

McGregor has shown a knack for taking advantage of opportunities when they are presented to him and according to the former featherweight and lightweight champion, 2020 was no different.

"There were no temptations around, you can’t really do anything, there’s nowhere to go,” said McGregor. “You gotta go inside yourself, you gotta spend time with your own thoughts and become comfortable in your own self. It was a learning experience and I’m very thankful for the year, it was a good year and I feel the better for it.”

Having only spent 40 seconds in the cage over the last two years, McGregor says he’s ready to put the season that never was behind him and focus on showing everyone how much better he has become since the last time he made the walk into the Octagon.

"I feel in amazing shape and I am in amazing shape and my skill set? I’ve grown so much and in so many areas of fighting and I’m just eager to get to show it,” said McGregor. “It was a turmoil of a 2020, I didn’t get my competition, which I wanted. I want to put my work to the test, you know? I want to put it out there for the world to see, I want to entertain the fans. My die-hard fans, my hardcore fans that have supported me through thick and thin.”

Last time they met, McGregor had his arm raised with a TKO victory in under two minutes. Poirier says he has put their 2014 meeting in the past, but McGregor believes that a mental edge led to his victory the first time and it will play an even bigger role in the rematch.

If McGregor is successful in the main event of UFC 257, the nature of that victory could be important.

During the UFC’s return to Fight Island last weekend, president Dana White revealed that lightweight champion Khabib Nurmagomedov plans to watch Saturday’s event and decide if he will come out of retirement to put the belt on the line one more time.

McGregor has been angling for a rematch against Nurmagomedov, the fighter he lost to at UFC 229 before a melee broke out leading to suspensions for both men, but says the undefeated champion wants no part of getting back into the cage with him.

"There’s a competitive nature in there now, I would like to compete correct and he doesn’t want that, he’s afraid of it,” said McGregor. “Let’s be real here, he’s walking away from the sport and, at the end of the day, I smacked his whole family around inside that Octagon. I finished the fight, he got out of there, jumped out, looked great and then cowered away when he landed on the ground outside the cage.”

So where does that leave the rest of the elite fighters in the UFC’s lightweight division? According to McGregor, miles and miles behind him.

"I’ll tell you what, this is going to be an easy rematch for me this (Saturday), but it won’t be my easiest rematch,” said McGregor. “When I get that rematch against Khabib, it will be an easy rematch and I guarantee this, if he wants to continue running, that’s no problem, I’ll eliminate the rest of them.”

"Besides him, who ran, it is Dustin, he’s knocked out Justin (Gaethje), he’s beaten Dan Hooker. And (Michael) Chandler? He’s come from a lower league and he hasn’t been tested in the UFC, so we’ll see and Justin has beaten Tony (Ferguson). So I would say Dustin is right up there, that’s why I’m excited with it and that’s why you’re going to see the levels and the difference in levels between myself and the top of the division.”

"Mystic Mac” has also been known for picking the round and fashion he’s planning to end a fight, in this case he has already predicted a KO inside the first minute. But which punch is going to be the winning blow? That you’ll have to wait till the main event and see for yourself.

"There‘s an array of shots and it will be all coming at him, ferociously, fast, with power and precision and patience and composure,” said McGregor. “It’s going to be a masterclass. What shot it is? I’ve got so many shots in my book, I could write a trilogy, so tune in and see.”