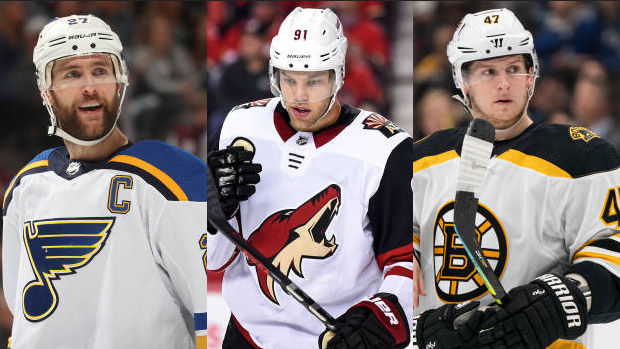 Commissioner Gary Bettman reiterated the NHL’s desire for a full 82-game regular season last weekend, but the possibility of a shortened 2020-21 season has free agents bracing for impact ahead of a most unusual Free Agent Frenzy.

The uncertainty surrounding next season will also likely give way to a new trend in structuring free agent contracts.

That lack of input in structure is reportedly one of the reasons why the St. Louis Blues have been unable to reach an agreement with captain Alex Pietrangelo, who remains the No. 1 player on TSN’s Top 75 Free Agents list.

Because there is a real chance players take home significantly less next year in the event of a shortened season.

That remains up for debate, depending on who you ask. The NHL maintains that it has the right to pro-rate player salaries for 2020-21, by invoking Paragraph 17 of a standard player’s contract. (Paragraph 17 states that in the case of “any condition arising from a state of war or other cause beyond League control” the NHL has the power to cease or reduce operations, which would give them the ability to pro-rate or cancel salaries altogether.)

The NHL Players’ Association sought changes to Paragraph 17 language in negotiating the new Collective Bargaining Agreement, but that only restricted teams from individually invoking that clause. Still, the NHLPA maintains that player salaries cannot be prorated by the NHL based upon a reduction in the number of regular season games without an agreement from the NHLPA.

Pro-rating salaries in a shortened season would be a double whammy for players who are already guaranteed to lose 20 per cent in escrow plus a 10 per cent deferral to owners.

But if the season is shortened to 48 games – generally the minimum required by the NHL historically for legitimacy – then Edmundson would stand to earn just 41 per cent ($1.1 million) of his scheduled $2.75 million next season when factoring in the pro-rated schedule.

So how will agents attempt to minimize that risk in 2020-21 for free agents?

There are two ways. One would be to ask for the bulk of next season’s salary in signing bonus. That will be difficult, because most teams are cash poor at the moment.

In Pietrangelo’s case, the Blues have never given a signing bonus to a non-entry level signee.

The other avenue is backloading the contract, a likely trend that was exactly the opposite of what most players and agents wanted in Free Agent Frenzies of the past.

“I would advise players to take as little as possible up front, then get as much as possible in years four, five and six,” one prominent agent said.

Limiting exposure in 2020-21 not only cuts down on the risk of pro-rated salaries, but would also shift the bulk of earnings to later years when the escrow percentage is scheduled to drop to six per cent, down from the 20 guaranteed next season.

The lower 2020-21 earnings should also be appreciated by owners, who will have to lay out less cash in a season when revenue will be down with the likelihood of empty or reduced-capacity arenas.

Edmundson’s contract can again be used as a model. After $2.75 million in Year 1, it climbs to $3.5 million, $4.56 million and finally $3.19 million. Edmundson’s initially negotiated contract actually had to be amended to comply with the variance rules before it could be officially filed.

The lesson remains true: Expect longer-term deals, those in the six, seven or eight-year range, to have a pronounced ‘hump’ in earning years in the middle. The key for agents will be to protect later-year earnings with signing bonus in order to lessen the blow of a potential buyout.

All of those factors will be in play behind the scenes during the Free Agent Frenzy.

“I’ve told my players to expect a crunch,” the agent continued. “Expect teams to be capped out. There will be very few UFA dollars. The goal should be to stay in the league as opposed to getting dollars or term.”

Stars backstop Anton Khudobin has launched himself into the Top 10 on the latest Top 75 with his incredible run to the Stanley Cup final. Teammate Corey Perry has also reminded teams why he is vital to team success.

Former Norris Trophy winner Zdeno Chara checks in at No. 19 after Bruins GM Don Sweeney left some uncertainty in the air.

There will be changes to the list ahead of Oct. 9, with qualifying offers due – potentially making players like Edmonton’s Andreas Athanasiou and Vancouver’s Troy Stecher unrestricted free agents – and the buyout period (Henrik Lundqvist, Olli Maatta?) opening before then.