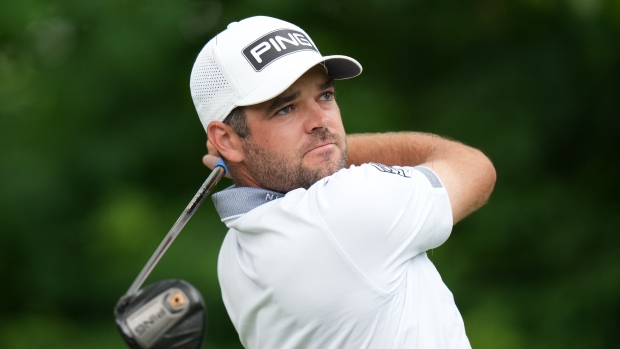 TORONTO — Corey Conners won a trophy at the RBC Canadian Open for the first time of his career. But it's not the one he really wanted.

Conners, from Listowel, Ont., fired an 8-under 62 in the final round of the Canadian Open on Sunday, finishing sixth on the leaderboard at 12-under par. He was awarded the Rivermead Cup as the lowest Canadian at the national men's championship as Rory McIlroy of Northern Ireland won the title for a second time.

During the awards ceremony Golf Canada CEO Laurence Applebaum spoke about how the 31-year-old Conners would be adding his name to a trophy that already has George Knudson, Mike Weir, Mackenzie Hughes and Adam Hadwin among others inscribed on it.

"Obviously, there's another trophy that we're all out here playing for, so hopefully some day I can get my name on that one as well," said Conners with a smile. "But it feels really special. There's a great list of Canadians who have their names on that trophy, so definitely an honour to have my name added."

No Canadian has won the national men's golf championship since Pat Fletcher accomplished the feat in 1954 at Vancouver's Point Grey Golf and Country Club. The last golfer born in Canada to win the Canadian Open was Karl Keffer of Tottenham, Ont., in 1914. Keffer won $100 for his performance.

Conners had six birdies and an eagle without a single bogey as he moved 13 spots up the leaderboard in the final round. His overall score was seven shots back of McIlroy.

It's projected that his performance will move Conners up six spots in the FedEx Cup standings, from 35 to 29. He was already the highest ranked Canadian on the PGA Tour and the world golf rankings.

Conners has already locked up berths at the British Open in July and at the U.S. Open, which begins on Thursday.

"I feel very positively about all parts of my game," said Conners. "Disappointed to come up a little bit short here, didn't quite get as much out of the game as I could the first few rounds but a lot of positive mojo heading into the U.S. Open next week."

Adam Svensson (67) of Surrey, B.C., was the second best Canadian at the tournament, moving up eight spots to tie for 21st.

The 2020 and 2021 editions of the Canadian Open were both cancelled due to the COVID-19 pandemic. Svensson said he was thrilled to once again play a PGA Tour event on home soil in front of Canadian fans.

"It's amazing the roar I got on No. 18 there. It was awesome," said Svensson. "Just to play in Canada, it's special to me because I grew up playing in Canada, obviously, but, it's just a fun week."

Hadwin (69), also from Abbotsford, was tied for 35th, and Aaron Cockerill (69) of Stony Mountain, Man., finished tied for 48th. Cockerill, who plays on the European-based DP World Tour, was making his PGA Tour debut.

This report by The Canadian Press was first published June 12, 2022.