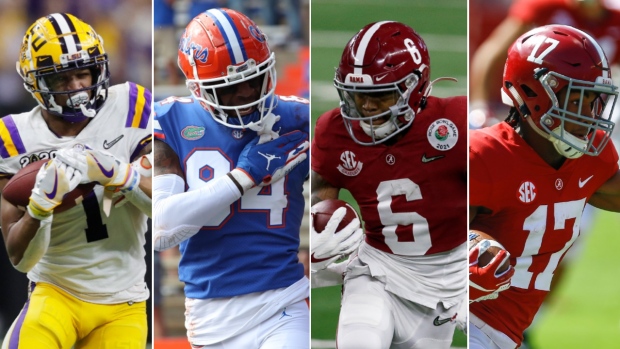 Quarterbacks have dominated the headlines leading up to the 2021 NFL Draft.

Following the San Francisco 49ers trading up to No. 3, it is very likely that quarterbacks will be selected with the first three picks for the first time since 1999.

TSN.ca’s look at the top quarterbacks​ heading into the NFL Draft, which kicks off next Thursday night and continues through Saturday, May 1.

Skill position players could be taken starting with the Atlanta Falcons at No. 4 as the team nears a crossroads with their franchise QB Matt Ryan. Do they select a skill position player and add to the receiving corps around the 35-year-old? Or will the team look to the future and draft a young quarterback to learn behind Ryan?

This year’s crop of skill players is very heavy at the top, with three wide receivers and one tight end in the conversation as top-10 selections.

Six wide receivers were taken in the first round of the 2020 NFL Draft. Scouts have told Sports Illustrated’s Albert Breer that the top three receivers in this year’s class – LSU’s Ja’Marr Chase and Alabama teammates DeVonta Smith and Jaylen Waddle – are in a league of their own.

“They’re different body types and styles,” one executive told Breer. “They’re all better than [Jerry] Jeudy and [Henry] Ruggs. [CeeDee] Lamb is right in the mix with them, but Ruggs and Jeudy are below those guys for me.”

Florida’s Kyle Pitts rounds out the elite playmaking talent at the top of the draft. The imposing tight end could be selected as high as fourth, which would make him the highest-drafted tight end ever, one spot higher than Riley Odom in 1972 and the highest since Vernon Davis was selected sixth overall in 2006.

TSN.ca takes a closer look at the top playmakers heading into the NFL Draft. 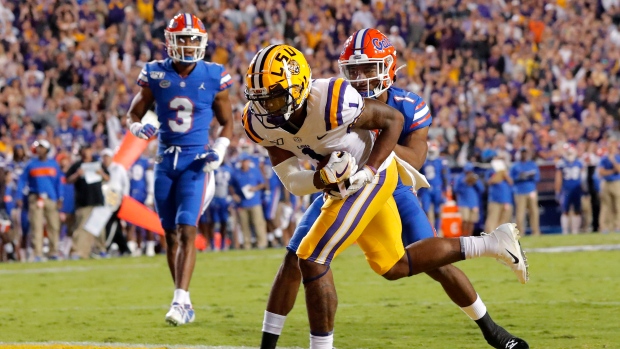 Despite opting out of the 2020 season, Chase is still considered the best wide receiver in this draft class.

In his sophomore season at LSU, Chase caught 84 passes for a then SEC record 1,780 yards and 20 touchdowns. He further added to his season in the National Championship game, catching a record 221 yards in LSU’s victory over Clemson.

Chase was honoured the Fred Biletnikoff Award as the best college receiver and was voted a unanimous All-American.

The Harvey, Louisiana, native is known for his speed, physicality and ability to separate from cornerbacks. He showcased his athleticism during his LSU pro-day, clocking a 40-yard dash time of 4.38 seconds along with a 41-inch vertical leap.

"The way he accelerates is on a totally different level,” one NFC executive told NFL.com. “He knows he can win one-on-one but once a coach puts more polish on him, he could be special."

Chase is already drawing comparisons to one of the league’s best wide receivers, as one scout told NFL.com’s Ian Rapoport that he is the “Best WR prospect since Julio [Jones].”

The most talked about landing spot for Chase has been a reunion with LSU teammate and 2019 Heisman Trophy winner, Joe Burrow. The Cincinnati Bengals have the No. 5 pick and Burrow has not held back his praise when asked about the possibility of adding Chase to the Bengals’ receiving corps.

“I wouldn't mind. He’s an exciting player and a great guy and a friend as well,” Burrow said during a press conference. “It’s pretty easy to throw to him when he has five yards of separation every snap."

As a guest on broadcaster Cris Collinsworth’s podcast, Burrow made it clear he wasn’t pushing for Chase, but continued to praise his former teammate.

“He just has a great way of getting open,” said Burrow. “He just really understands it all. He’s a complete player.

“You really can’t go wrong. There’s so many great options. But I’m very comfortable with Ja’Marr. Like I said, we have great chemistry talking to him all the time, but we’re in a good position.”

Whether or not the Bengals select Chase remains to be seen but it would be surprising if he is not the first wide receiver taken off the board. 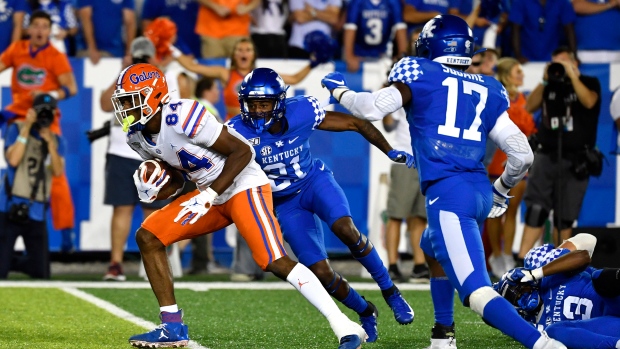 Pitts may be the best offensive weapon in the draft. At 6-foot-6, 246 pounds with blazing speed, the tight end was able to dominate at Florida.

During the shortened 2020 season, Pitts caught 43 passes for 770 yards and 12 touchdowns in just eight games. He won the John Mackey Award for most outstanding tight end and was voted a unanimous All-American.

Against Alabama, the best team in the nation, Pitts posted 127 yards and a touchdown on seven catches.

At his Florida pro day, Pitts recorded a 40-yard dash time of 4.44 seconds, not far off the position record of 4.38 set by Davis in 2006. His 83 ⅜ inch wingspan is also the longest recorded for a WR or TE in the last 20 years. His measurables even drew comparisons to Hall of Fame receiver Calvin Johnson.

​While it is premature to compare Pitts to Johnson, who holds the NFL record for most receiving yards in a single season, the tight end is confident he can live up to high expectations.

"Start at a high level and keep increasing every year and being able to do other things that other tight ends aren't doing, which would make me special," Pitts said following his pro day. "At the end of the day, with all the preparation and through the years, I feel like I'll be the best to ever do it."

Pitts’ blend of ball skills, athleticism, and work ethic could force defences to completely alter their game plans. Some scouts have echoed Pitts’ sentiment that he could be one of the best tight ends the league has ever seen.

"Pitts is a generational talent. We think he could be a poor man's Calvin Johnson at wideout," one director of college scouting told Walter Football. “On top of being a freak athlete, he's a great kid and hard worker. So you know he's safe to pan out into being a special player when you combine his intangibles with his rare skill set.”

The top three teams in the draft are likely to select quarterbacks, while the next three teams – the Falcons, Bengals, and Miami Dolphins – may be looking to put talent around their incumbent QB’s.

The Dolphins trading down to No. 6 suggests they are comfortable selecting whoever falls to them. Picking a versatile weapon like Pitts would greatly benefit the development of quarterback Tua Tagovailoa, who struggled without top-level weapons last season.

While there has been some discussion whether teams should invest a high pick on a player at Pitts’ position, one veteran talent evaluator told Breer that, regardless of position, PItts should hear his name called early on draft day. 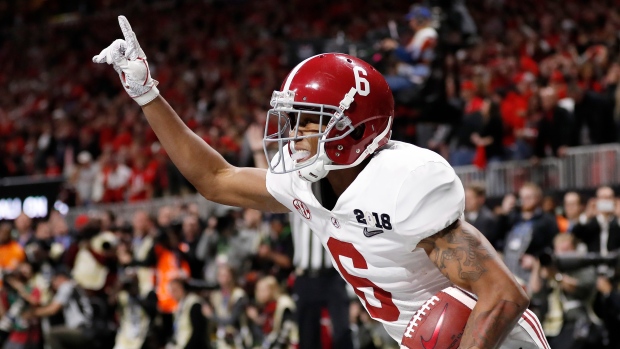 Smith had an incredible senior season with Alabama.

In 13 games, Smith hauled in 117 passes for 1,856 yards and 23 touchdowns. Both his yardage and touchdown totals led the NCAA in 2020 and broke the SEC records set by Chase in 2019. His 46 career touchdowns are also the most all-time by an SEC receiver.

His incredible year culminated with one of the greatest single-game performances in National Championship history. Smith set title game records with 12 catches and three touchdowns while totalling 215 yards in Alabama’s 52-24 win over Ohio State.

The 22-year-old became the first wide receiver to be named AP Player of the year since the award’s inception in 1998. Smith was also named the 2020 Heisman Trophy winner, becoming only the fourth wide receiver to win the award and first since Desmond Howard in 1991. Smith beat out teammate Mac Jones and presumptive No. 1 overall pick Trevor Lawrence for the honour.

Despite all the accolades and incredible production, Smith is not seen as the top receiver in this class because of his size. At 6-foot-0, 166 pounds, Smith may see his draft stock slip due to his stature.

Regardless of his size, many believe that his excellent route running and ball skills will make him successful in the NFL.

“Heisman Trophy winner. Has it all. We know DeVonta Smith is a freak of nature,” said NBC Sports NFL Analyst Chris Simms on his Unbuttoned podcast. “The speed is special. It’s really special. He pulls away from everybody. He has way better strength and physicality than I was expecting.”

DeVonta Smith at 166 lbs is a number that will def make teams a little uncomfortable, but he has a frame that can add more bulk. And there’s absolutely nothing on film that strength is an issue. Never jammed at LOS, plays through contact, holds his ground on contested balls.

"He may be a bean pole, but he won't fail. He won't fail off the field or on the field. Those coaches rave about how he is wired and how much football means to him,” one scout told NFL.com.

While Chase is ranked as the No. 1 WR in this class, Smith isn’t far behind. The Dolphins’ move to No. 6 could set them up perfectly to reunite Smith with former Alabama teammate Tagovailoa.

The Detroit Lions are in desperate need of weapons for new quarterback Jared Goff after receivers Kenny Golladay and Marvin Jones Jr. left in free agency. The Carolina Panthers are in a similar situation, as Smith would make an excellent receiver for recently acquired QB Sam Darnold. 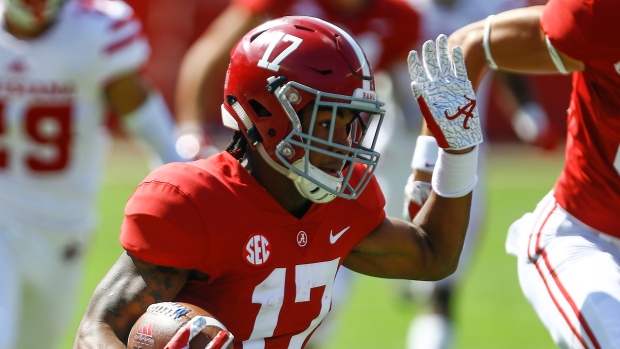 Waddle didn’t put up the gaudy numbers that his teammate Smith did, but he remains right in the discussion as a top-10 selection in the draft.

Waddle played just six games in 2020 due to a broken ankle. When he was on the field, he was electric, catching 28 passes for 591 yards and four touchdowns. Despite his abbreviated season, Waddle was named to the All-SEC second team.

His best statistical season came as a true freshman where he posted 848 yards and seven touchdowns on 45 receptions.

Waddle is not the most imposing receiver at 5-foot-9, 180 pounds, but he possesses game-breaking speed and skill with the ball in his hands. Of his 20 career touchdowns, 11 went for 50 or more yards.

The Houston native’s speed and after-catch abilities have drawn comparisons to Kansas City Chiefs receiver Tyreek Hill, who Waddle has said he models his game after.

While Waddle faces the same questions regarding size and strength that Smith does, scouts and analysts are not concerned, citing that his explosive playmaking abilities will overcome any physical shortcomings.

"That kind of speed changes everything when it comes to game-planning for the other guys,” an AFC personnel director told NFL.com. “They have to account for him any time he's on the field and that's going to help your entire offense."

Both Alabama receivers are in the conversation as top-10 picks, with many seeing Smith as the clear-cut better between the two. ESPN draft analyst Mel Kiper said it would not shock him to see Waddle get drafted before Smith but that the pair are two of the best players in this year's draft class.

“They’re both great, and they have both pushed each other,” Kiper said during a media conference call. “They are both remarkable talents and remarkable workers.”

Like Smith, Waddle would be an excellent fit in Miami alongside former teammate Tagovailoa. Pairing him with another playmaking wide receiver like Will Fuller would give the Dolphins one of the most dangerous WR duos in the league.

If Waddle falls out of  the top-10, the Philadelphia Eagles at No.12 could be his landing spot. The Eagles drafted receiver Jalen Reagor in the first round of the 2020 NFL Draft, but he did not live up to expectations in his rookie year. The team has continued to search for weapons to surround quarterback Jalen Hurts.