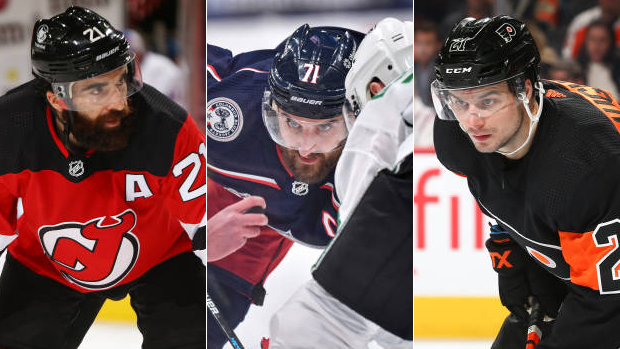 But while Galchenyuk has produced a goal and four points in nine games since debuting with the team, Dubas isn't ready to close the door on adding to his group yet, either.

“I think the emergence of Galchenyuk playing with John (Tavares) and William (Nylander), both in terms of the fact he’s produced a little bit but in terms of how hard he’s playing and the effectiveness that he’s brought to the group, I think certainly reduces the urgency,” Dubas said.

“But with all that said, if we can do something that we think is going to be a good fit in the locker room and on the ice, I think we would still very openly explore that.’’

Dubas told LeBrun he's "confident" in the team's depth on defence, and while some have argued that the team should add a goaltender, he said Frederik Andersen is not expected to be out long-term and he isn't planning to address the position.

"It’s my expectation that in the coming weeks here that the three goalies between the roster and the taxi squad will be Freddy Andersen, Jack Campbell and Michael Hutchinson,’’ Dubas said.

Winless in their past seven games, the St. Louis Blues have dropped out of the playoff picture as the deadline approaches and it appears general manager Doug Armstrong could subtract, rather than add over the next five days.

"One guy who has nine goals and 21 points on the season is Mike Hoffman, a pending UFA who could also be on the move," TSN Hockey Insider Pierre LeBrun said Tuesday on Insider Trading. "The St. Louis Blues are not out of contention but we know from GM Doug Armstrong's history, that he's not worried about trading pending UFAs when his team underachieves. He traded Kevin Shattenkirk at the deadline in 2017 despite being in a playoff spot. He traded Paul Stastny to Winnipeg in 2018 despite being a point out, and word is, from talking to different teams around the league, that he's open to potentially moving some pending UFAs. The Blues have disappointed.

"Hoffman would be one, perhaps Tyler Bozak is another."

The Blues have slipped to fifth in the West Division with a 2-7-1 record in the last 10 games and now sit five points back of the Arizona Coyotes for fourth with one game in hand.

Hoffman signed a one-year, $4 million contract with the Blues in January after first joining the team on a professional tryout. He has nine goals and 21 points in 36 games this season. The 31-year-old has scored at least 22 goals in each of the past six seasons and posted a career-high 36 goals with the Florida Panthers in 2018-19.

Bozak carries a $5 million cap hit in the final season of a three-year deal signed with the Blues as a free agent in 2018. The 35-year-old has two goals and four points in 14 games this season, having missed time due to a concussion and an upper-body injury.  He scored 13 goals and posted 29 points in 67 games last season.

According to CapFriendly, Bozak had a 10-team no-trade clause in his contract that expired on Jan. 31.

Aaron Portzline of The Athletic argues that Riley Nash's injury - which will take him out through the majority of the remaining season - should serve as a cautionary tale to the Columbus Blue Jackets on the dangers on playing potential trade pieces.

Portzline argues that Nash, a pending unrestricted free agent, could have drawn a mid-to-late round pick for the Blue Jackets at the deadline and the team should be cautious about playing other tradeable assets moving forward.

Blue Jackets defenceman David Savard is listed at No. 1 on the TSN Trade Bait board, followed closely by captain Nick Foligno at No. 4. Portzline also lists defenceman Michael Del Zotto and one of either Joonas Korpisalo or Elvis Merzlikins as players who could be moved as Columbus shifts into sellers.

Portzline points to the Winnipeg Jets, Toronto Maple Leafs, Boston Bruins and Tampa Bay Lightning as potential suitors for Savard and lists Toronto, the Colorado Avalanche and New York Islanders as landing spots for Foligno, if he's open to a move.

The New Jersey Devils scratched winger Kyle Palmieri over the weekend as they prepare to trade the pending UFA, while the Buffalo Sabres scratched Taylor Hall on Tuesday. Columbus has two games remaining before the deadline - on Thursday against the Lightning and Saturday against the Chicago Blackhawks.