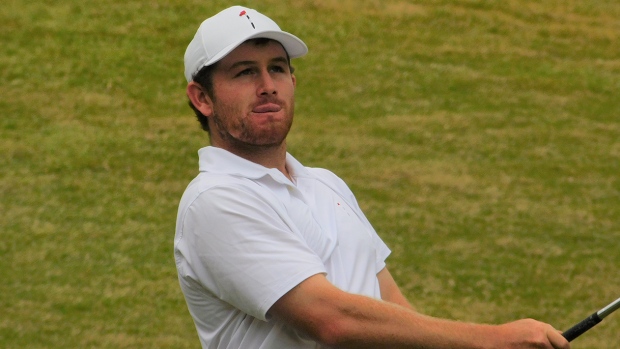 PINE MOUNTAIN, Georgia—It was 224 days ago that Patrick Cover sat on the patio outside the clubhouse at Callaway Gardens Resort. He had just shot a 63 in the final round of the LOCALiQ Series’ Classic at Callaway Gardens. Without scoreboards visible, for a fleeting moment he thought he may have won the tournament or perhaps earned a spot in a playoff. Neither happened as Cover came up a stroke short of both Stoney Crouch and Hayden Shieh. Friday, Cover stood on the same patio.

This time he experienced a little redemption.

The North Carolina native shot a final-round, 5-under 65 to break free from a four-way tie for the lead when the day began to capture medalist honors at the Mackenzie Tour – PGA TOUR Canada’s sixth Qualifying Tournament. Cover enjoyed a stretch of 24 consecutive holes without a bogey, and his 72nd-hole blemish hardly mattered as the former North Carolina-Wilmington golfer finished at a 14-under to defeat amateur and playing partner Alexandre Fuchs by three shots. Hard-charging Ben Wolcott, on the strength of a final-round 63, and Daniel O’Rourke, with a closing 65, tied for third to earn exempt status for the Tour’s first half of the season. Five players tied for fifth, with Luke Schniederjans and Austin Morrison capturing the final two exempt spots.

The day’s storyline, though, belonged to Cover, who turned pro in 2018 and spent the 2019 season playing on PGA TOUR Series-China. Cover started quickly Friday, with a birdie on the opening hole, and he kept extending his lead, with none of the other 54-hole leaders—Fuchs, Morrison and Schniederjans—able to put any pressure on him. Cover birdied Nos. 4 and 6 and then put his approach shot in tight on No. 8, draining the four-footer to move to 4-under for the day and 13-under overall.

“I played really well the last two days. [Thursday] a 66 and 65 today. I had really good control over my ball and putted really well all week,” Cover observed. “After I made the turn (to the back nine), I shot 4-under. I knew I had a pretty good lead. I tried to make it as stress-free as possible, to leave [the ball] below the hole and not give myself too many downhill putts and hit the go-to shot off the tee.”

Cover only made two bogeys over his final 36 holes.

“I’ve been playing pretty well recently, and I’ve had a couple of good tournaments, where I’ve had that two-, three-, four-shot lead with nine holes to play. I’ve done well,” he added.

Fuchs didn’t get off to the best start, playing alongside Cover and Morrison in the final group. He was 1-over through seven holes. He got things going when he hit his approaches close on both eight and nine for no-sweat birdies to turn at 1-under. Even after hitting a tough patch, a 2-over stretch between Nos. 10 and 14, he finished birdie-birdie-par-birdie to take second by himself. His four-day performance will also force him into a decision, but his work this week may have decided things for him. The senior at Liberty University has the option to return to school because of the NCAA-allowed “COVID year” offered because it canceled so many sports last year. With a place to play this summer, the pro ranks are in Fuchs’ immediate future once Liberty’s season concludes.

“After starting the day a bit frustrated, I turned it around on the last 11 holes. There were a couple of lucky approaches I had on the back nine, and I was able to sink my putts for birdies. I had one where my lie was next to a birdhouse, and I just prayed I would hit it somewhere close to the pin,” he said. “My prayer worked. Then, on 18, I was in the tall grass (on his drive), and somehow I was able to turn that into another birdie.”