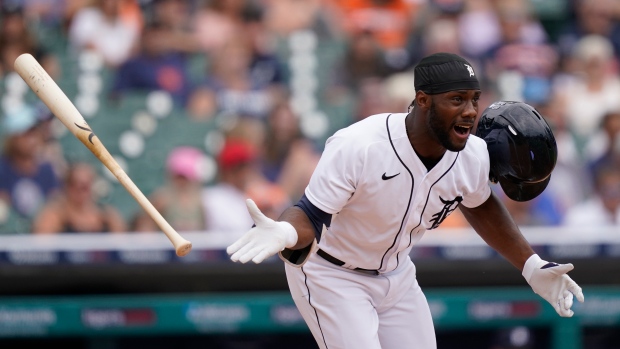 Fantasy leagues are in for a shake up this week, as Chicago White Sox outfielder Eloy Jimenez will make his long-awaited return to the lineup on Monday against the Kansas City Royals.

The 24-year-old left fielder was placed on the 60-day injured list during Spring Training after suffering a torn pectoral muscle. The slugger should be a league-changing bat heading into the home stretch of the season. Last season, Jimenez hit .296 with 14 home runs in 55 games and he should once again provide elite power to go along with an average close to .300.

He is only rostered in 72 per cent of ESPN leagues, so every manager should check on his availability immediately.

If Jimenez was snapped up prior to his activation, here are six other players rostered in fewer than 50 per cent of ESPN leagues who are worthy of an add this week.

Baddoo was one of baseball’s best stories at the start of the season. After his development was derailed by Tommy John surgery in 2019, the outfielder was selected by the Tigers in the 2020 Rule 5 Draft and made an immediate impact with the club in 2021. The 22-year-old swatted four home runs over his first eight games and took the league by storm.

Baddoo’s strikeout and whiff rates remain near the bottom of the league, so his average could present issues for some managers. However, his sprint speed is in the 91st percentile league wide and he will continue to rack up the steals as long as he can find a way to get on base.

Harrison has been a steady presence for the Nationals and fantasy managers all season, slashing .282/.354/.399 with five home runs and five stolen bases.

The 34-year-old has picked it up over the past two weeks, collecting a hit in 11 of his past 12 starts while driving in 11 runs and scoring nine over that span. Harrison’s average will likely stay above .280 as he rarely strikes out and is able to consistently put the ball in play.

Harrison’s lack of power or speed may hurt owners in some formats but he is a very valuable player to roster in points leagues, where his plate discipline and ability to get on base can shine.

Marsh, the Angels’ top prospect, was recalled by the team late last week and has made an immediate impact, collecting five hits over his first five games to go along with the first stolen base of his career.

The 23-year-old was drafted by the club in the second round of the 2016 Amateur Draft and has advanced through the organization thanks to a combination of speed and power. MLB.com gave Marsh a 60 grade (on the 20-80 grade scale) on his speed and hit tool, while giving him a 50 for his power.

While Marsh might not be an elite power threat, his speed and prospect pedigree makes him worth an add in the Angels lineup alongside Shohei Ohtani and, eventually, Mike Trout and Anthony Rendon.

Sandoval has been very effective this season and will be in high demand after his latest start. The 24-year-old dominated the Minnesota Twins for 8.1 innings on Saturday night, only allowing his first hit with one out in the eighth while striking out 13.

In 14 appearances this season (11 starts) Sandoval has a 3.52 ERA, 1.10 WHIP, and 81 strikeouts in 71.2 innings. Sandoval’s above-average strikeout rate is especially valuable because the Angels allow him to pitch deep into games. He has surpassed 100 pitches in each of his past four starts, completing at least seven innings in three straight.

Sandoval has been consistent since becoming a part of the Angels’ rotation and should continue producing quality outings for fantasy managers.

The once heralded prospect has been slow to find his footing in the majors as he came into this season with an ugly 5.97 ERA in 95.0 big-league innings from 2018-2020. With the rotation falling apart due to injuries, the Braves gave Toussaint a chance to prove himself, and the results have been promising.

In starts against the Padres and Phillies, the 25-year-old has allowed just two combined runs and struck out 15 over 13.2 innings.

Toussaint has good strikeout potential and could provide managers with wins pitching in front of the Braves’ offence. The former first-round pick does have some control issues, as he walked 14 batters in 23.1 minor-league innings this season.

He carries plenty of upside and is worth an add for his next start against the Milwaukee Brewers, who lead the league in strikeouts.

Soto endured some rough patches early in the season but has improved his approach and now has a firm grasp on the closer job in Detroit.

Soto shared the ninth inning with Michael Fulmer, Bryan Garcia, and Jose Cisnero at different points this season but now seems to be the main closer, as he has pitched in the Tigers’ past six save chances, converting five.

Since the beginning of June, Soto has converted six save chances (five in the last week) with a 2.37 ERA and 25 strikeouts in 19.0 innings. Most importantly, he has greatly improved his control, decreasing his walk rate from 18.8 per cent in May to under 10 per cent in June and July.

The Tigers have looked like a different team since the all-star break and Soto should see the majority of the save opportunities moving forward.