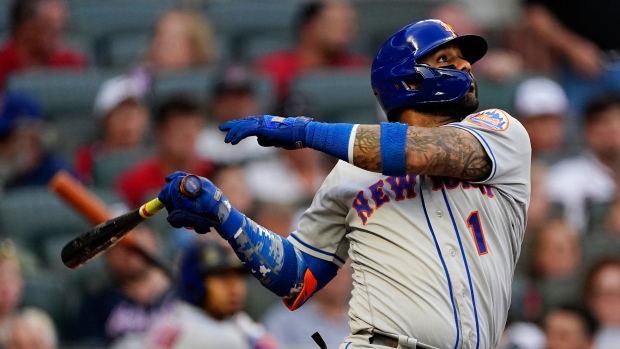 The Tampa Bay Rays knocked down their first prospect domino on Friday, trading shortstop Willy Adames to the Milwaukee Brewers for a pair of relief pitchers.

With the starting shortstop position available, fans and fantasy managers clamoured for the promotion of the team’s top two prospects, Wander Franco and Vidal Brujan. Unfortunately, the Rays threw water on those hopes, recalling No. 7 prospect Taylor Walls instead.

Franco, who was covered two weeks ago, continues to mash in his first stint at Triple-A. The league’s No. 1 prospect has performed at every level and will force the Rays to recall him sooner rather than later.

Brujan has performed even better than Franco through 15 Triple-A games, slashing .333/.429/.650 with six home runs and seven steals. The Rays understand the logjam they have in the middle infield and have moved the natural second baseman to an outfield position this season.

Managers with space available should strongly consider stashing either player for their eventual callup.

Managers who need immediate help can take a look at these six players rostered in fewer than 50 per cent of ESPN leagues.

To say the Mets are hurting would be an understatement. After placing star first baseman Pete Alonso on the injured list, the Mets now have 14 players on the IL, including four outfielders, four members of the starting rotation, and their starting first, second, and third basemen.

Villar is a known commodity at this point in his career and will provide managers with plenty of steals but will be a negative in batting average and power categories. Over the past two weeks, the 30-year-old is hitting just .209 but has stolen four bases and hit three home runs.

Given regular playing time, Villar will run on a 40-to-50 steal pace and could single-handedly win the category for managers in some weeks.
As long as the Mets are dealing with injuries, Villar will get at-bats and is worth a spot on any roster willing to deal with his low batting average.

Dalbec is a very streaky hitter and is currently on a run which has made him one of the most valuable players in fantasy over the past two weeks. Since May 7, Dalbec is hitting .316 with four home runs, 15 RBI.

Over that span only Houston Astros first baseman Yuli Gurriel has driven in more runs than Dalbec. Only New York Yankees outfielder Aaron Judge and St. Louis Cardinals third baseman Nolan Arenado have a higher slugging percentage than Dalbec’s mark of .737 during that time.

The 25-year-old is still striking out 27 per cent of the time through his hot streak so he will continue to have peaks and valleys in his performance. However, while he is this hot, he needs to be rostered in all leagues.

Kirilloff started his Twins career off slowly, failing to register a hit over his first five games. Once he got adjusted, the 23-year-old went on a tear, hitting four home runs with 11 RBI before going on the IL with a wrist injury.

He returned on Friday and picked up right where he left off, going 2-for-5 with two RBI and two runs scored. He was batted in the clean-up spot for the Twins, who have no problem giving him a premium spot in the lineup.

Kirilloff, like Franco and Brujan, is a highly-ranked prospect and will be a valued contributor for the Twins and fantasy managers moving forward.

Turnbull was last seen throwing the sixth no-hitter of the young season on Tuesday against the Seattle Mariners. He’s been somewhat inconsistent this season but his overall line looks good, with a 2.88 ERA and 31 strikeouts over 34.1 innings.

The 28-year-old has allowed more than three runs just once in six starts this season and has gone at least five innings in all but one start. Prior to the no-hitter, Turnbull was coming off a one-run outing against the Kansas City Royals.

His next outing will come against Cleveland, who along with the Mariners, have been no-hit twice this season. At the very least, Turnbull is worth a look against a poor offence while he is pitching well.

Richards has shown flashes of elite potential throughout his career but has been unable to sustain any type of success due to injuries. In his 11-year career, Richards has hit the 100-inning mark just three times and has not done so since 2015.

In his first season with the Red Sox, the 32-year-old is healthy and pitching well once again. Following a nightmare debut against the Baltimore Orioles (2.0 innings, six earned runs), Richards has settled in, posting a 4-1 record with a 2.72 ERA over his next eight starts, covering 46.1 innings.

The Red Sox have the league’s No.1 offence and should provide Richards with plenty of support moving forward. He successfully navigated the Toronto Blue Jays’ tough offence in his last start but has a pair of tough matchups against the Atlanta Braves and Houston Astros up next.

Richards is a high-risk, high-reward option on Tuesday at home against the Braves.

Fulmer returned for the 2020 season but was not himself, finishing the shortened season with an 8.78 ERA in 10 starts before being moved to the bullpen prior to this season.

The 28-year-old seems to have found new life as a reliever, as he holds a 3.69 ERA and has pushed himself into the saves conversation for the Tigers. Fulmer had not allowed a run in his past eight appearances prior to Sunday’s blown save. Over that span he has racked up two wins, two holds, and four saves. More importantly, Fulmer has been given the team’s past four save chances.

Fulmer has become a must-add for managers chasing saves.