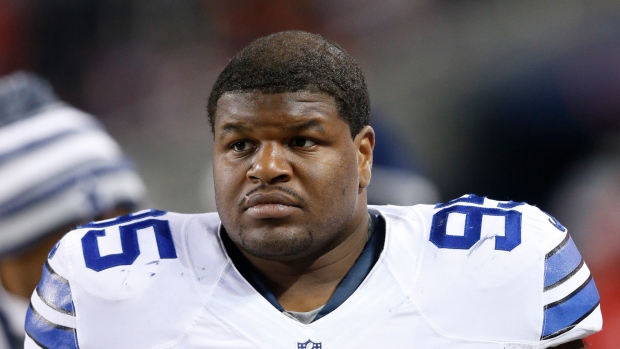 The Cowboys placed Brent on the reserve/retired list Friday, a few days after he met with coach Jason Garrett and owner and general manager Jerry Jones to discuss his future. He had been participating in the club's off-season program.

The 27-year-old Brent returned to football briefly last year after serving a 10-game suspension. He played in one game in his first action in almost exactly two years.

Brent retired before training camp in 2013 while awaiting trial in his intoxication manslaughter case. He was convicted early last year, and a 10-year prison term was suspended. Brent, who had a previous drunken-driving conviction in Illinois, spent about six months in jail.

"I have made the decision that football isn't as much of a priority in my life as other things at this time," Brent said in a statement released by his agent. "I will endeavour my best to make the Dallas Cowboys and their fans proud as I embark on this new journey in life."

Garrett wouldn't offer any specifics on why Brent decided to retire. If Brent decides to play again, the Cowboys retain his rights.

"I admire Josh in a lot of ways for coming back from a really significant situation in his life. It's not easy," Garrett said. "He's worked very hard to find some normalcy in his life at this point, and I think he wants to focus on that right now."

Brent missed the first two games last year after his reinstatement while working his way back into football and nursing a sore groin. After getting one tackle and one assist in a visit to Chicago, he was sidelined a week later with a calf injury and didn't play again. Brent played in 40 games with five starts over four seasons with Dallas.

In December 2012, Brent crashed his Mercedes sedan on a suburban Dallas highway on the way back from a nightclub. Brown, his former teammate at Illinois and his roommate in Texas, was in the passenger's seat. Tests later showed Brent to have a blood-alcohol level of 0.18 per cent, more than twice the legal limit for drivers in Texas.