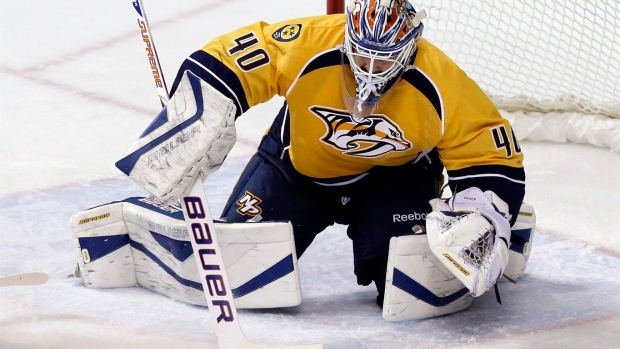 GLENDALE, Ariz. - The Arizona Coyotes made their big off-season move before the free agency period started, trading for a playmaking centre to replace the one they lost.

Once they could sign free agents, the Coyotes filled a couple of holes.

"This was pretty much what we hoped to get accomplished," Coyotes general manager Don Maloney said.

Arizona initiated a buyout of Mike Ribeiro's contract on Friday after last year's big signee didn't pan out in his one season in the desert.

The Coyotes quickly filled his spot, landing Gagner and right wing B.J. Crombeen on Sunday in a trade that sent a draft pick to Tampa Bay.

"We like the energy and physicality that he's going to bring," Maloney said. "We're all about details. He's got a lot we like."

Arizona had little shot of re-signing backup goalie Thomas Greiss, who signed with Pittsburgh so he could have a chance at more playing time.

The Coyotes took a little bit of a risk in signing Dubnyk.

He was Edmonton's starter to start last season, but was traded to Nashville and eventually ended up in Montreal's system after being waived.

The Coyotes are hoping to resurrect his career behind goaltending coach Sean Burke, who had success with two other big goalies, Ilya Bryzgalov and current starter Mike Smith.

"You look at our history, we've had good luck helping that bigger goalie find his game," Maloney said.

The Coyotes are still in talks with right wing Radim Vrbata.

He has been a consistent scorer in five seasons with the Coyotes, but became a free agent on Tuesday and reportedly has several potential suitors.