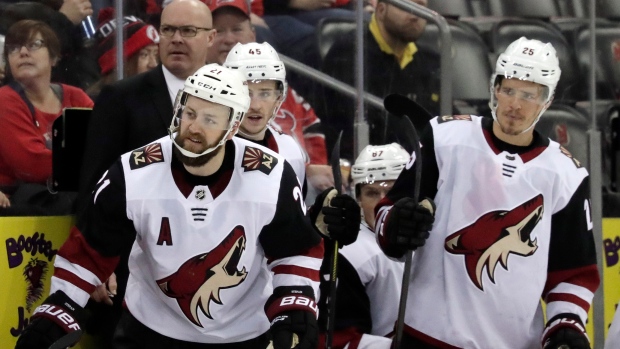 NEWARK, N.J. — Despite being eliminated from post-season contention, the banged-up New Jersey Devils have hurt the playoff hopes of some wild-card contenders in recent weeks.

Late last month they surprised the Montreal Canadiens and Saturday they put a crimp in the Coyotes' chances with a 2-1 shootout win Saturday afternoon, sending Arizona to its fourth straight loss.

"We got the point, but we have some guys playing tight," said Arizona coach Rich Tocchet, whose team is on an 0-2-2 run. "It's my job to get these guys to relax."

The Devils won because Blake Coleman and Pavel Zacha scored in the fifth and sixth rounds of the shootout and goaltender MacKenzie Blackwood made 23 saves in regulation and was beaten on one shootout attempt as New Jersey won for only the fourth time in 14 games (4-9-1).

"He's such a beast," Coleman said of Blackwood. "He is intimidating. You come down on him and he takes up a ton of net and he can move as fast as anybody I have seen. I am surprised they got any on him."

Blackwood and Coyotes goaltender Darcy Kuemper, who had 31 saves, were outstanding in the game.

Blackwood gave up an early goal to Arizona defenceman Oliver Ekman-Larsson, while Kuemper gave up a soft one to Drew Stafford late in the first period.

The goaltenders stopped the first four shootout attempts on each side before Coleman scored with a forehand. Conor Garland forced another round scoring on a backhander. Zacha beat Kuemper between the pads and Richard Panik failed to respond for the Coyotes.

"It was a bit open and so was mine," Zacha said. "My mind was made up when I was going and the guy was really far from the net."

Arizona had two great chances to win on a power play in overtime, with Derek Stepan and Clayton Keller both hitting a goalpost.

"We battled hard and that's all you could ask for a team," Coyotes defenceman Niklas Hjalmarsson said. "We're playing in the NHL against good teams. They had a lot of guys back in their lineup and they have a good hockey team. There are no easy games."

Kuemper kept the Coyotes in the game in the last two periods of regulation, stopping 22 shots as the Devils had five power plays. He had two saves in close on Coleman and another on Hischier in the final seven minutes.

Hjalmarsson also batted a floating puck away from goal in the waning minutes.

Ekman-Larsson opened the scoring with a wrist shot from the point 2:31 after the opening faceoff.

Stafford tied the game with under three minutes left in the period with his second goal in two games on a shot that went between Kuemper's pads.

Kuemper made up for the mistake in the second period, stopping 10 shots, including eight on the Devils' four power plays in the period.

Both teams had players returning from injury. The Coyotes' Stepan missed 10 games with a lower-body injury. Back for New Jersey were Hischier, Kyle Palmieri, Miles Wood, John Queeneville and defenceman Sami Vatanen and Mirco Mueller.

NOTES: Devils D Will Butcher missed his second straight game with an illness. ... Devils placed F Blake Pietila on waivers on Friday. He was not claimed. ... The Devils recognized recently retired longtime off-ice official Vin Godleski. He stepped in and was a lineman in Game 4 of the 1988 Wales Conference Final between the Devils and Bruins after NHL officials refused to work the game because New Jersey had taken legal action to allow Jim Schoefeld to coach the game despite a league suspension.

Coyotes: At the New York Islanders on Sunday.