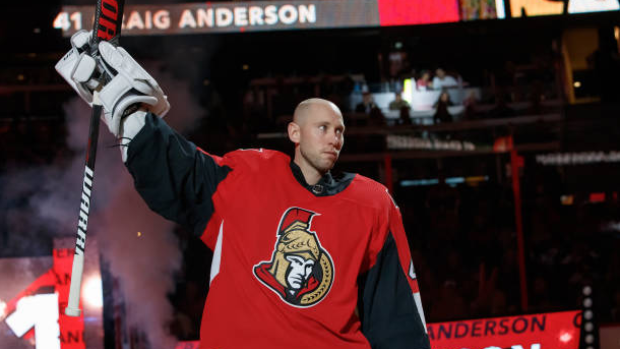 It was a low-key, modest announcement – almost a throwaway nugget of information in a session dominated by talk of the upcoming NHL Draft and the opening of free agency.

But in a strange twist, it was the perfect exit for the netminder who never sought the limelight of the No. 1 goalie job in a Canadian market. The 39-year-old would not have wanted a splashy farewell press conference or an emotional goodbye with fans and media.

At some point, Anderson should get an opportunity to re-connect with the Ottawa fan base for an emotional evening. His Senators resume, which boasts more than 400 games and 200 wins, has certainly etched his name as a future addition to the club’s Ring of Honour inside Canadian Tire Centre.

Prior to Anderson’s arrival, Senators fans often felt nervous about their situation in the crease. Ottawa had earned the reputation of being a goalie graveyard – a place where netminders melted under the pressure of playing in a hockey-mad market.

There was Patrick Lalime’s infamous Game 7 meltdown against Toronto.

The tumultuous tenure of Ray Emery.

The injury-plagued career of Pascal Leclaire.

Even Stanley Cup-winning goalies such as Tom Barrasso and Dominik Hasek couldn’t seem to shake the curse.

Ottawa was a place that offered job security for public service workers, not goaltenders.

But when Bryan Murray pulled off a trade in February of 2011, sending Brian Elliott – himself a victim of Ottawa’s haunted crease – to Colorado for Anderson, all of that changed.

In many ways, Anderson’s departure from Ottawa was as understated as his arrival.

Murray brought in Anderson for a test drive – hoping that he could convince the pending free agent to sign with the Senators before hitting the market in the summer of 2011.

Anderson immediately endeared himself to Ottawa fans, posting a 47-save shutout in Toronto on a Saturday night in his first start in a Senators jersey.

Anderson sparkled in his first stint with the Senators down the stretch of the 2010-11 campaign, with an 11-5-1 record and a .939 save percentage. Some fans grumbled that Anderson’s stellar play in that run cost the club the first-overall draft pick – ultimately dropping them down to the sixth spot.

But in hindsight, that was a small price to pay to land a franchise goalie.

For almost a decade, Anderson was the epitome of cool and calm in a tumultuous environment that would have tested the mental resolve of any netminder. While the roster was overhauled around him multiple times, Anderson never once publicly demanded a trade to a better situation, even as veteran teammates were being jettisoned all around him.

Anderson was at his best in the playoffs, establishing himself as a reliable postseason netminder. In 41 career playoff games with Ottawa, he boasted a .928 save percentage – a metric that should have earned him more than just one trip to the conference final.

He held his own in playoff series against the likes of Carey Price and Henrik Lundqvist – goalies with Hall of Fame resumes who made nearly double what Anderson was being paid.

Even when his team would lose a playoff series with Anderson in net – and they did on four different occasions – nobody pointed a finger at the goaltending position. It was a stark departure from the previous playoff meltdowns in Ottawa, where the No. 1 goalie was often the prime culprit.

But when Ottawa fans think of Anderson’s signature performance with the club, their minds don’t immediately jump to a high-stakes playoff game.

Instead, most Ottawa fans remember the night of Oct. 30, 2016, when Anderson posted a 37-save shutout against the Edmonton Oilers. With the hockey world aware that his wife, Nicholle, was battling cancer, Anderson turned aside every Edmonton shot during the game – then had to turn aside tears as he was feted by the Edmonton crowd afterwards.

The image of his Oilers counterpart Cam Talbot cheering him on the bench remains one of the most powerful moments in Senators history.

Anderson authored so many memorable moments in the blue paint in Ottawa, but none come close to having the impact of that singular start in Edmonton four years ago.

In the months that followed, Anderson cemented his status as a fan favourite – ultimately taking the Senators to double-overtime in Game 7 of the Eastern Conference final against Pittsburgh that spring.

You would be hard-pressed to find a Senators fan who put any blame on Anderson for the Chris Kunitz game-winning goal, which serves as a firm reminder of how far the pendulum has swung when it comes to goaltending in Ottawa.

Before Anderson came along, it would have been unfathomable for the Senators to suffer a crippling Game 7 loss without a significant share of the blame landing on the goaltender’s shoulders.

But over the course of a decade Anderson managed to change the narrative on goaltending in Ottawa –  a feat that is more impressive than anything on his goaltending resume.