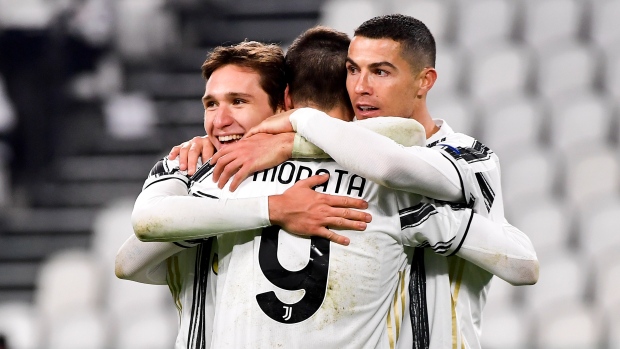 TURIN, Italy — Cristiano Ronaldo scored his 750th career goal to help Juventus beat Dynamo Kyiv 3-0 on Wednesday and leave his team with a chance of securing top spot in its Champions League group.

Ronaldo scored Juve’s second goal and also hit the bar after Federico Chiesa opened the scoring in the first half. Álvaro Morata completed the scoring in a game that saw Stéphanie Frappart became the first female referee to officiate a men’s Champions League match.

“We celebrate his records almost every game,” Juventus defender Leonardo Bonucci said. “We can only be happy to be part of his astounding path in this sport.”

Juventus remained second in Group G, three points behind Barcelona after the Catalan club won 3-0 at Ferencváros. Both clubs had already sealed qualification to the round of 16 but a win for Juventus at Barcelona in the final round next week could see the Bianconeri snatch top spot.

Ronaldo celebrated his achievement in an Instagram post which he ended with: “Next stop: 800 goals! Let’s go!”

The result and performance will ease some of the pressure on Juventus coach Andrea Pirlo. The 41-year-old former Juventus player is a few months into his first coaching job and has come in for criticism after several disappointing displays from his team.

“I’m young and I know I have to improve like my players, but I’ll go ahead with my work,” Pirlo said. “I feel ready for the match at Barcelona, those were the easiest games to play in and I think they will be the same as a coach. Certain matches change your season in terms of confidence, we’re going there to win.”

Juventus had rested Ronaldo this past weekend and was held to a disappointing draw at Benevento in Serie A but made a big impact on his return.

Juventus broke the deadlock in the 21st minute when Chiesa rose high at the far post to head in Alex Sandro’s cross from the left.

Alex Sandro created another great opportunity 10 minutes later, weaving past two defenders before setting up Ronaldo, but his effort cannoned off the crossbar.

Juventus almost conceded at the end of the first half as goalkeeper Wojciech Szczesny had to come flying off his line to deny Viktor Tsyhankov.

Ronaldo did get on the scoresheet in the 57th for his 750th goal for club and country — and one of the easiest. Chiesa raced down the right flank and whipped in a cross which the goalkeeper pushed onto Morata's leg before the ball bounced toward Ronaldo, who was left with the simplest of tap-ins at the far post.

Chiesa was also involved in Juve’s third goal as he burst into the box and picked out Morata, who coolly slotted it into the bottom right corner.

It was Morata’s sixth goal in the competition this season.