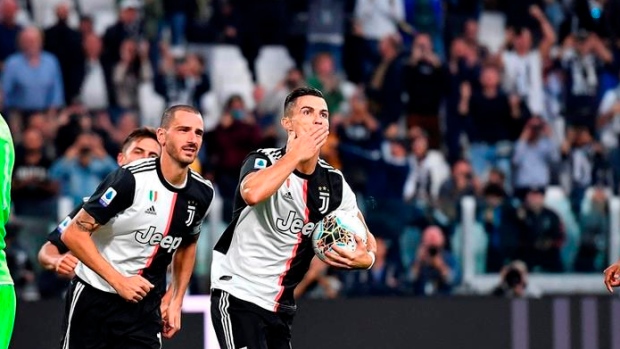 MILAN — Aaron Ramsey scored in his debut to send Juventus on its way to a 2-1 win over newly promoted Hellas Verona amid a strained atmosphere at Allianz Stadium on Saturday.

His goal cancelled out Miguel Veloso's opener for Verona, which also missed a penalty. Cristiano Ronaldo was more successful with his spot kick for Juventus in the second half.

"I've waited a long time for this moment," said Ramsey, who has only recently returned to fitness following a hamstring injury. "I'm really happy, both for the victory and for the goal."

Juventus also needed Gianluigi Buffon to pull off a number of crucial saves to stop Verona from equalizing in the second half.

Ronaldo put Juve's sub-par performance down to the players' exertions midweek in the 2-2 draw against Atletico Madrid in the Champions League.

"It was a difficult game, but the important thing is that the team did well, we were losing and we recovered," he said. "After the Champions League we were tired, it's normal after such an intense game like the one against Atletico, but we take three points and go ahead."

There was a small protest outside the stadium before the match in Turin in support of the 12 hardcore Juventus "ultra" fan leaders who were arrested Monday after allegedly making illegal demands to the club to obtain more tickets.

A group of around 20 fans chanted for their release while others handed out leaflets. There were also no flags or banners displayed in the Curva Sud, where the ultras normally watch the match from.

As well as Ramsey making his debut after joining from Arsenal in the off-season, Buffon was playing his first match since his return after a season at Paris Saint-Germain. It was his 902nd club match as a professional, equaling Paolo Maldini's record for an Italian player.

Buffon could do nothing as Verona surprisingly took the lead in the 21st minute.

Samuele Di Carmine was tripped over by Merih Demiral but sent the resulting penalty onto the upright. However, Juventus failed to clear and Velose fired into the top corner from 20 yards out.

Juventus levelled 10 minutes later when Ramsey's effort was deflected into the bottom corner.

And the Bianconeri went in front four minutes after the interval as Ronaldo converted the penalty after Juan Cuadrado was fouled by Koray Günter.

Inter Milan maintained its perfect start to the season as it beat city rival AC Milan 2-0 in an entertaining derby match.

Both teams had a goal ruled out in the first half and Inter hit the woodwork. The Nerazzurri broke the deadlock shortly after the interval with a deflected strike from Marcelo Brozovic.

Romelu Lukaku all but sealed the result in the 78th minute with his third goal in four Serie A matches.

It would have been worse for Milan had it not been for several impressive saves from goalkeeper Gianluigi Donnarumma.

This was a fourth successive win for Inter in its first season under Antonio Conte. It was Milan's second defeat of the fledgling campaign.

Inter is the only team in the Italian league to have won all of its matches.