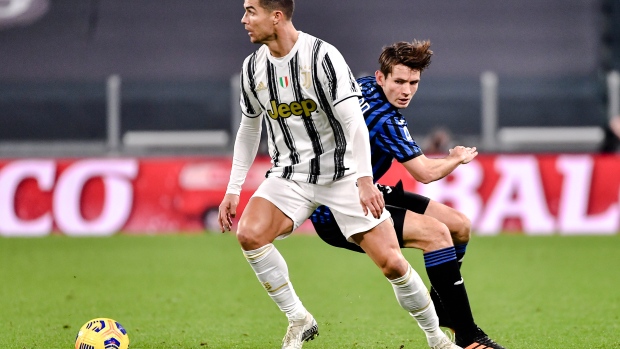 TURIN, Italy — A muscle issue will keep Cristiano Ronaldo out of a key Serie A match at Atalanta on Sunday.

“Cristiano will not play,” Juventus coach Andrea Pirlo said Saturday. “He could not recover from a flexor issue. So with the medical staff we decided that tomorrow’s match was too risky for him.”

Pirlo added that “after so many matches, he could have suffered a serious injury.

“He was not feeling able to push like he had been doing recently, so we decided to give him some rest to allow him to recover for Wednesday’s match (against Parma).”

Juventus did not specify which flexor muscle Ronaldo injured.

Third-place Juventus is one point ahead of Atalanta and one point behind second-place AC Milan amid a tight race for the Champions League places.

Pirlo cited three matches that the 36-year-old Ronaldo played with Portugal during the recent international break as the cause of the problem.

“He told me that he was supposed to play only two matches with Portugal (against Azerbaijan and Serbia in World Cup qualifiers), but then the disallowed goal against Serbia did not secure six points and so he was forced to play the third match (against Luxembourg) as well rather than coming back here before the third match," Pirlo said. "So it was too much of many things for him — travelling, playing.”

Juventus has drawn all three of the Serie A matches that Ronaldo missed this season — two when he had the coronavirus and another when he was rested.