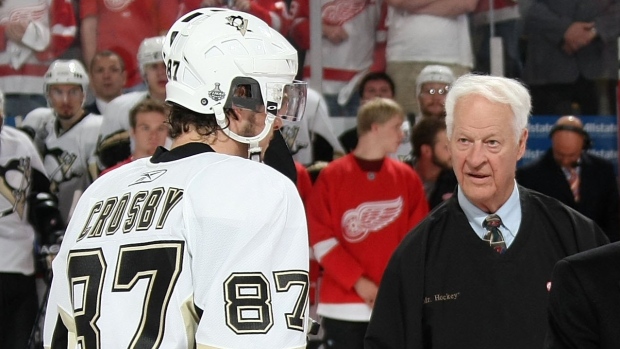 SAN JOSE, Calif. — Sidney Crosby can't recall whether it happened during his first or second season in the league, but he remembers everything else about meeting Gordie Howe.

"Like anyone else, you don't even know what to say," Crosby said of his brief encounter with Howe.

Crosby described Howe as the ultimate role model, someone he was fortunate to have met.

The two legendary figures connected after a game between the Penguins and Red Wings at Joe Louis Arena in Detroit, early in the career of the Pittsburgh captain. It was an unexpected meet-and-greet between two of the top players of their respective eras.

Crosby remembers being struck by how kind and genuine Howe was.

"He's probably met so many people over the years, but I think for anyone who's met him, they'll tell you that he makes you feel pretty comfortable," said Crosby, who was speaking ahead of Game 6 of the Stanley Cup final.

Like Wayne Gretzky, who has described Howe as his hockey idol, Crosby, too, was influenced by the long-time Red Wings great. He said those like Gretzky and Howe set an example for him not only on the ice but off it, in terms of their dedication to the sport.

Gretzky and Howe, he noted, were unique in terms of how much they loved and cared about the game and how much they were willing to give back to it.

"Obviously he was done playing by the time I was even born," Crosby said. "But I think if you love the game you love reading stories about the people who played it. He played with a ton of passion, played on that edge, wasn't afraid to play physical, too. Those are kind of things you love about hockey player, the way they work, the way they compete. He was one of the best at it."

"When you think of hockey, that's who you think of, you think of Gordie Howe," Crosby added. "The way he played, the way he conducted himself, he's a role model for a lot of people, including myself."