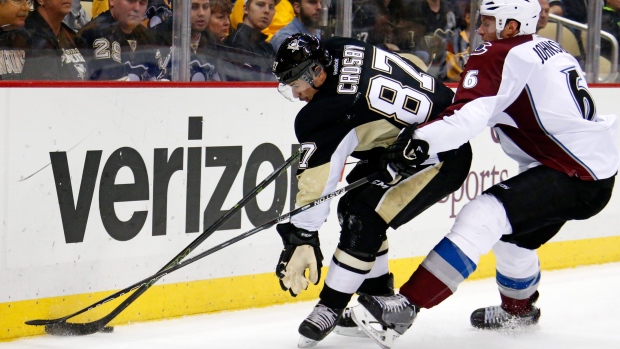 PITTSBURGH, Pa. - Pittsburgh Penguins captain Sidney Crosby is in the midst of a career-worst start to this season and just trying to capitalize on his opportunities.

Crosby sparked his team in the third period on Thursday night, scoring his first game-winning goal of the season during the Penguins' 4-3 victory against the Colorado Avalanche.

"You can get all the chances you want and you can do good things out there, but you have to produce," Crosby said. "You look at the game, and if I don't take advantage of that chance, I'm probably sitting here wondering what could have been."

Crosby netted his third of the season, first in seven games and first even-strength goal of the season. It was his first game-winner since March 28 against Arizona. Crosby, a two-time scoring champion and former 50-goal scorer, has three goals and 10 points in 19 games.

"I know it's important to bury your chances and create out there," Crosby said. "We try to do our best."

Evgeni Malkin also scored on a power play for his seventh goal of the season, and the Penguins improved to 56-4-1 when Malkin and Crosby score in the same game. David Perron and Chris Kunitz each scored their third goals and the Penguins won their second straight after dropping three of four.

Tyson Barrie got his first score this season, briefly pulling Colorado within a goal in the third period before Crosby helped the Penguins regain a two-goal cushion. Pascal Dupuis chipped the puck ahead to Crosby, and he split the defence and slid a backhander between Reto Berra's legs.

Matt Duchene scored twice while Colorado dropped its second straight after winning the first three games of a season-high seven-game trip. Duchene's second goal with 1:23 left gave the Avalanche life while they pressed for the tying goal in the final seconds.

Duchene has a five-game point streak and has nine goals and 15 points in eight games this month. He moved ahead of Mats Sundin for a pair of franchise career marks — 11th in scoring (335) and 12th in goals (136).

Marc-Andre Fleury made 28 saves for Pittsburgh and is tied for the league lead with 10 wins. Berra stopped 26 shots for the Avalanche, who twice made it a one-goal game in the third period.

"It was a hard-fought game, but at the same time we have to find ways to win those hockey games," Avalanche coach Patrick Roy said. "That's what we should be concerned about."

The Avalanche scored on their third power play of the first period. Duchene collected Jarome Iginla's point-shot rebound and flipped one past Fleury with 25 seconds left. The assist moved Iginla ahead of Peter Stastny for 37th on the NHL's career point list. Pittsburgh has allowed a power-play goal in six straight games.

Pittsburgh quickly jumped ahead in the second period, scoring three times in 2:08. It was the burst Pittsburgh needed and set the stage for Crosby to come through in the third.

"It was nice to get a big cluster like that, especially at home," Crosby said. "We were able to keep the momentum and we got rewarded for it."

NOTES: The Penguins are 7-1 when scoring a power-play goal and 9-3 in one-goal games. ... Pittsburgh has won seven of its last nine against Colorado. ... Iginla is tied for 31st career after playing in his 1,411th game on Thursday. ... Penguins' D Olli Maatta was released from the hospital Wednesday and is expected to miss about a month with an upper-body injury. He left a game Tuesday after a hit from Nino Niederreiter. ... D Zach Redmond made his season debut for Colorado. Nate Guenin, a Pittsburgh native, was scratched for the Avalanche in addition to John Mitchell. Pittsburgh sat Daniel Sprong and the recently recalled David Warsofsky. ... Colorado's 15-day trip matches the longest in franchise history and continues Saturday night at Washington before wrapping up Monday night at Winnipeg. ... Pittsburgh continues its four-game homestand Saturday against San Jose.