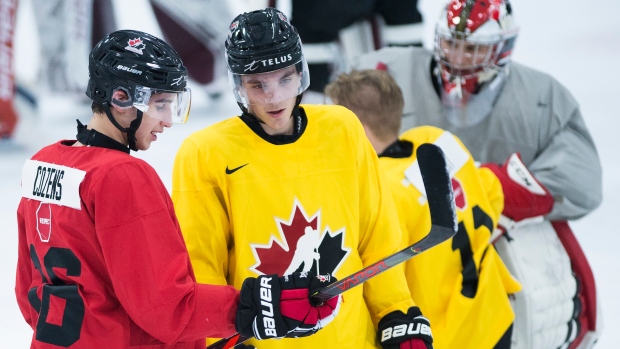 Thursday's matinee contest against the U Sports All-Stars could be the final audition for some world junior hopefuls on Team Canada.

All four of the goaltenders at Canada's selection camp played in Wednesday's game, with the No. 1 job for the world juniors believed to still be up for grabs.

TSN Hockey Insider Bob McKenzie believes Olivier Rodrigue could have an inside edge on a roster spot given his Team Canada experience, while Nico Daws also may have an advantage given his strong play in the OHL this season - a 13-3-4 record with a .939 save percentage with the Guelph Storm. That would leave Hunter Jones and Joel Hofer battling for the third and final spot at goaltender on the roster.

Canada has 31 players taking part in selection camp, but will need to trim their roster to 23 ahead of the tournament in the Czech Republic later this month.

It's unclear whether Ty Dellandrea, Liam Foudy and Jacob Bernard-Docker, all scratched for Wednesday's game, will enter the lineup on Thursday. As TSN's Mark Masters notes, usually being a scratch in the first game of the selection camp is a positive sign, indicating that management already knows enough about what the player brings to the table.

Dellandrea was among four cuts made by Team Canada following their second game against the U Sports All-Stars last year, while Bernard-Docker was the final cut of selection camp in 2018.