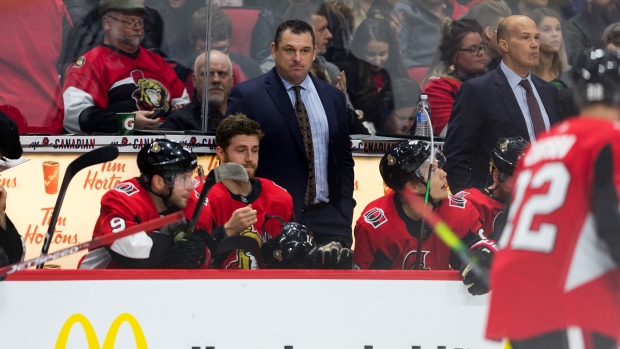 As the Ottawa Senators were preparing for their game against the Los Angeles Kings at the Staples Center on March 11, it felt like the world outside was crumbling.

Within a one-hour span that evening, a series of COVID-19 stories were breaking at unbelievable rate.

As these events were unfolding, Senators head coach D.J. Smith and his team were well aware of the evolving situation. Smith said he and a handful of staff members even watched U.S. president Donald Trump’s televised speech that evening before they took the ice to face the Kings.

“The world is different today with guys having phones and social media. Guys were aware that an NBA player tested positive around 5 p.m. With us being on the west coast, we were ahead of it. There were some questions about whether we were going to play,” Smith said on Wednesday, during a video conference call with Ottawa reporters. “It was a different atmosphere than any game I’ve been a part of. Once the NBA cancelled their games, we knew we wouldn’t be far behind.”

The Senators and the Kings played that game – the last official major sporting event in North America before all leagues ground to a halt. As the clock counted down during the 3-2 Kings’ victory, an eerie sense of resignation permeated the Staples Center – one that was palpable to those involved in the game.

The next day – with the NHL season officially on pause – the Senators flew back to Ottawa on their charter aircraft. In the ensuing days, the team would become the reluctant public face for COVID-19 in the NHL, with five of their players testing positive for the virus.

There were questions whether the Senators should have been playing games in California in early March – especially in San Jose, where Santa Clara County had already been attempting to place a ban on large public gatherings before the Senators game against the Sharks on March 7.

Smith said that there were some early signs of social distancing starting to take hold in San Jose when the team arrived.

“In San Jose, it was kind of weird. There really wasn’t a lot of people out,” recalled Smith.

But in southern California – where the team spent the final few days of their road trip – it seemed like business as usual.

“At that point, nobody knew what we know now. The fear hadn’t set in. Everyone in Anaheim, in L.A. was living life as normal. You’d see the odd person with a mask in L.A.,” said Smith.

The five Senators players who tested positive have never been publicly identified, but Smith reiterated on Wednesday that none of them exhibited any symptoms that escalated to the point where they were in any serious danger.

“Every one that had it didn’t have the horrible symptoms that you’re seeing on TV,” explained Smith. “Some guys didn’t feel well, but being athletes, they got through it and are on the other side now.”

Smith does admit, however, that having such a close personal encounter with the disease and seeing so many people he knew afflicted served as an eye-opening experience.

“This disease doesn’t spare anyone. It doesn’t matter – actors or actresses, rich or poor.  You have to make sure you stay safe,” he said. “I’m glad that everybody on that plane is now doing well. It hit us, but it probably saved a lot of us too. We probably got a bit of a jump on this.”

Smith – like all other NHL head coaches – is in a holding pattern. After serving his 15-day quarantine period in Ottawa after returning from California, Smith took his wife and his two sons back to his hometown of Windsor, Ont.

While some of his counterparts have designs on the Stanley Cup if the 2019-20 season can be salvaged, Smith and the Senators have no grand illusions of a playoff spot. The team was sitting in 30th place when the season was paused, with just 62 points after 71 games.

But even though his team would have nothing to play for in the final 11 regular-season contests, Smith is hopeful his squad can lace up again in the 2019-20 season – if only for the Ottawa fans who endured another long year.

“Certainly yeah, we want to finish on the right note,” Smith says when asked if he would like to finish the campaign. “We would have loved to have played one last hard game for them on the way out.”

Whenever the Senators do come back to play, Smith wants to the bar to be elevated in this market. Three consecutive seasons of languishing at the bottom of the standings has taken its toll on the fan base, and the head coach believes it’s time for a change in mentality.

“Whether it’s this season or next, we know we have to take a step forward,” Smith said. “I talked to a lot of the young guys and, whether we play this year or it’s next year, whenever the Ottawa Senators play, our mentality has to change. It’s time for us to take a step.”

If the 2019-20 NHL season does resume at some point in the weeks or months ahead, Smith believes his youthful group will have a distinct advantage when it comes to shaking off any rust due to an extended period of inactivity.

“With us having such a young team, young guys can get up and get going. Our guys can probably get up and get playing sooner than most teams,” Smith said. “If you’re an older team heading into a playoff run and have been sitting around, you might have a tough time getting up to speed.”