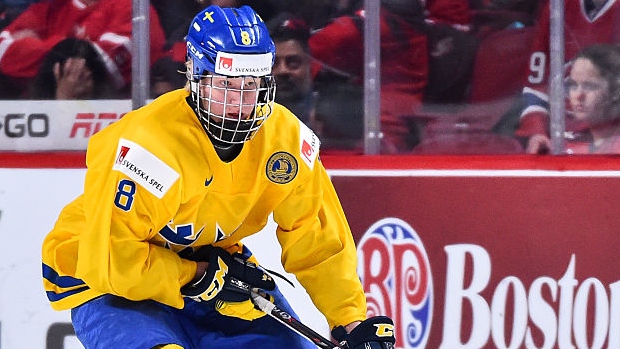 BUFFALO, N.Y. — One year ago, Nico Hischier used the World Junior Championship to propel him down the track toward No. 1 overall.

That train left the station long before this year’s tournament for Sweden’s Rasmus Dahlin, the consensus No. 1 pick for June’s NHL Draft.

The hype surrounding Dahlin had reached a fever pitch, but he’s lived up to every bit of it in Buffalo.

The silky skating Swede entered Sunday’s final day of preliminary round action tied for the lead in scoring with six points – as a 17-year-old defenceman in a tournament typically dominated by 19-year-olds. Dahlin can match Hischier’s output from last year with one more point. Four of Dahlin’s tournament-high six assists are primary

Scouts from all 31 NHL clubs have soaked in his every movement in Buffalo. Fans in Arizona, Buffalo, Ottawa, Detroit, Montreal, and Vancouver will ring in the New Year with dreams of Dahlin.

Hard to blame them. Dahlin isn’t just a generational talent. He is a franchise defenceman in the making.

“Rasmus Dahlin is to a franchise what McDavid and Matthews have meant to the Oilers and Maple Leafs,” TSN director of scouting Craig Button said. “He is to defencemen what those two guys are to centremen. He is a No. 1, elite defencemen who can play in the NHL right now. Right now.”

While Team Canada will wait until Jan. 11 to formally decide whether to use major junior players, Dahlin could become the first player to jump from World Juniors to the Olympics in just a few months since Eric Lindros did it in 1992.

Lindros, then 18 and already drafted No. 1 overall by the Quebec Nordiques, parachuted into the World Juniors and collected 10 points. He then re-joined the Canadian Olympic team and netted 11 points to help Canada to a silver medal.

U.S. Olympic hopeful Ryan Gunderson leads the Swedish Hockey League in scoring by defencemen and has played against Dahlin in the two seasons since he burst into the top men’s league as a 16-year-old.

“It’s hard to even explain his potential,” Gunderson said Saturday. “I can’t think of anyone to compare him to because his skating is so good. It’s insane. He cuts back on a dime, keeps his speed with his glide. He skates like Scott Niedermayer, but he’s more dynamic. And he has hands like Pavel Datsyuk.”

The name game has been a fascinating dynamic for Dahlin. He has been compared to everyone from Erik Karlsson to Nicklas Lidstrom in Sweden – heady praise considering the nine Norris Trophies between them.

“He is half Karlsson, half Lidstrom,” said TSN’s Ray Ferraro, who has seen Dahlin play about 12 or 13 times now. “He defends like Lidstrom and skates like Karlsson. He’s more physical than both. He’s not afraid to step up and make an open-ice hit.”

Even Lidstrom himself has chimed in, telling hockeysverige.se that he sees Brian Leetch in Dahlin.

“I think Rasmus Dahlin has incredible potential,” Lidstrom said. “The one I’m thinking about is Brian Leetch … he dared to go up with the puck and take advantage of his speed and take ice when there. He has a self confidence that is evident when playing.”

Dahlin would become just the second Swede ever to go No. 1 overall since Mats Sundin broke the barrier as the first European in 1989. Victor Hedman went No. 2 in 2009; Karlsson was 15th in 2008.

Karlsson weighed just 160 lbs. when he was drafted. Dahlin is 6-foot-2 and already pushing 190 lbs. Scouts in Sweden say Dahlin is well ahead of where Hedman, Karlsson and Lidstrom were at the same age in their development. That has left some to wonder whether they’re seeing a player who has simply just matured earlier than everyone else, or if he is the real deal.

That’s where some of the scouting bias comes in. See a player so many times and you begin to pick apart the faults in his game rather than seeing the big picture.

It’s a problem not many scouts are having with Dahlin.

“There’s really nothing to not like about him,” said one NHL scout on Saturday, whose team is in the Dahlin sweepstakes. “His skating is so effortless that sometimes you watch him, especially in a tournament like this one, that he almost seems bored or disinterested. That’s not the case. His head is always up, the puck is on his stick more than its not, and he is seeing the game develop about three seconds faster than anyone else on that ice.”

It’s almost easy to forget that Dahlin is still just 17. He netted a goal and an assist last year as a 16-year-old, the same age McDavid and Sidney Crosby were when they first appeared.

“I think there’s almost been some fatigue when talking about ‘generational’ this or ‘generational’ that with all of the players over the years,” the scout said. “But Dahlin is every bit as good – in a position that’s even harder to find.”