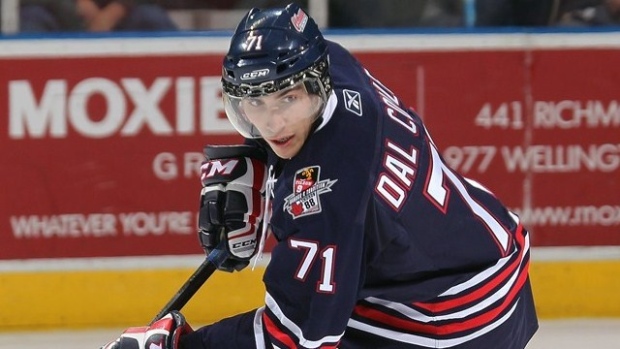 Forward Michael Dal Colle was among the players released on Sunday as Team Canada trimmed their roster for the upcoming World Junior Hockey Championship in Finland.

Dal Colle was the fifth overall selection of the 2014 NHL Draft, selected by the New York Islanders. He is in his final year of junior eligibility.

Forwards Pierre-Luc Dubois and Spencer Watson and defenceman Jakob Chychrun were also cut by Team Canada on Sunday and will not accompany the team to Finland for pre-tournament action next weekend.

Also on Sunday, the Vancouver Canucks announced the team would loan forward Jake Virtanen to Team Canada. Virtanen recorded four points at the 2015 World Juniors, while winning a gold medal with the team. Virtanen's addition means the team will be forced to cut two forwards in Finland, for a total of 13. The team will also need to cut two defencemen.

Goaltender MacKenzie Blackwood is suspended for the first two games of the tournament and, as a result, Samuel Montembeault has been added.

The evaluation camp wraps up on Monday before the team departs for three pre-tournament games.

The Canadians will face Belarus on Saturday, the Czech Republic on Sunday and Sweden on Dec 23.

The tournament starts on Boxing Day with Canada facing the United States in the opener. Watch the game live on TSN and TSN GO at 1pm et.