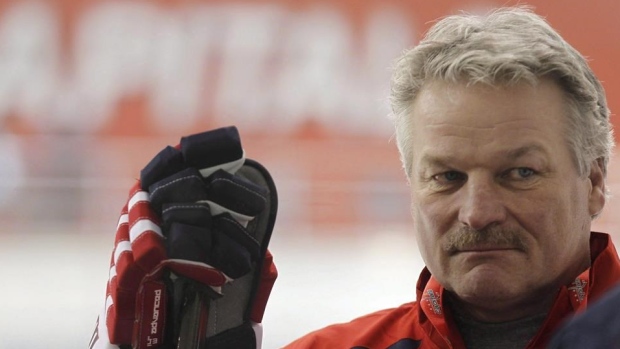 PLYMOUTH, Mich. — Alan May remembers a dedicated, physical specimen. Keith Jones recalls unmatched passion and a brilliant hockey mind. As a player, Dale Hunter had all those things.

And then there were the practical jokes.

"He put Garry Galley's truck up on blocks at the old practice facility," May said of Hunter, his teammate with the Washington Capitals. "Other times he'd take Garry's car and move it to the strip mall a few blocks away.

"Dale was the last guy you wanted to pull a prank on because he'd get you back 10 times worse."

Jones also once found himself in Hunter's crosshairs.

"I realized there was a horrifically bad smell in my car," Jones said with a laugh during a recent phone interview. "As I started to drive away I looked back, and out of the arena door was Dale Hunter's head and Calle Johansson's head peeking around the corner and laughing.

"They had taken this Swedish fish that is apparently a delicacy and stuck it under the seat. I drove with my head out the window to get to the car wash, and went back three straight days."

Often a man of few words publicly, but a noted character behind the scenes with those that know him best, Hunter is finally getting a chance to coach Canada at the 2020 world junior hockey championship.

Set to turn 59 on Wednesday, Hunter has been a Canadian Hockey League force since buying the OHL's London Knights with his brother, Mark, back in 2000. The franchise has won two Memorial Cups (2005, 2016) and sent a number of pro-ready players to the NHL, including Patrick Kane, John Tavares, Corey Perry and Mitch Marner.

But apart from coaching Canada at the under-18 Ivan Hlinka Memorial Tournament in 2013 — which he won — Hunter has been on the outside looking in with the national program.

Hunter said he's always had "other stuff on and we had great coaches."

"It's awesome," he added of the opportunity. "It's an exciting time."

May and Jones, however, have a few ideas about why it's taken so long for their former captain to get the nod.

"There's a lot of petty jealously at the success he's had," said May, who now works on Capitals' television broadcasts. "I've seen a lot coaches get that gig that don't even hold a candle to Dale."

"He doesn't campaign for anything," added Jones, an analyst for NBCSN and a colour commentator for the Philadelphia Flyers. "He's not out to promote himself. He's out to make his teams better, he's out to win at all costs."

Hockey Canada, not surprisingly, has a different perspective.

"We only have one spot for a head coach every year," said Shawn Bullock, director of the men's teams. "Dale was enthusiastic when he got the call.

"We couldn't be more excited."

Some of Hunter's former players raised eyebrows when told this would be the first time he's getting the gig.

"It's definitely surprising," Marner said earlier this month. "But it doesn't surprise me he's getting the chance now."

Hunter left the Knights to coach the Capitals in the 2011-12 season, leading Washington to an upset victory of the defending Stanley Cup-champion Boston Bruins in the first round of the playoffs.

But instead of continuing in the NHL, he returned to London and his Knights.

Even when they were playing on the same line, Jones said there was never a doubt Hunter would find his way behind the bench.

"Dale had a really genuine way about getting his message across," Jones said. "You knew his intentions were for the team to be better, and it wasn't about himself. There was no acting behind Dale Hunter.

So what can fans expect from a Dale Hunter-coached team on the national stage?

"An extremely competitive group that are never going to quit," Jones said. "They might lose, but they're going to go down swinging."

Hunter is on the ice this week in suburban Detroit with 38 players for a series of practices and exhibition games against the U.S., Sweden and Finland at the World Junior Summer Showcase. It's the first opportunity for Hockey Canada's brain trust — including Mark Hunter — and coaching staff to get an up-close look at some of the teenagers hoping to represent their country at this year's tournament, which begins Dec. 26 in the Czech Republic.

Canada has won the event two of the last five years, but also failed to medal the last three times it's been played in Europe.

"It's a big ice surface," Dale Hunter said. "It's a tough tournament."

Hunter played 19 years and nearly 1,600 regular-season and playoff games in the NHL with Washington, Quebec and Colorado. He had 3,565 penalty minutes — second all-time — and never registered more than 28 goals or 79 points, but was a force every time he stepped on the ice.

"He could pass the puck, he could run a power play, he knew when to stir things up," May said. "Such a polite, well-mannered person, but so highly competitive and laser-focused."

His teammates said what stood out was Hunter's ability to rise above the fray.

"Dale was one of the first guys that perfected simple," May added. "It's a simple approach, but it's not simple to be able to do that. You have to learn how to be that focused."

There were moments he'd probably want back, like the dirty hit on New York Islanders star Pierre Turgeon in the 1993 playoffs that resulted in a 21-games suspension, but there was never any doubting his passion.

"Dale's just a guy that wants to win."

He'll finally get that chance on junior hockey's biggest stage.