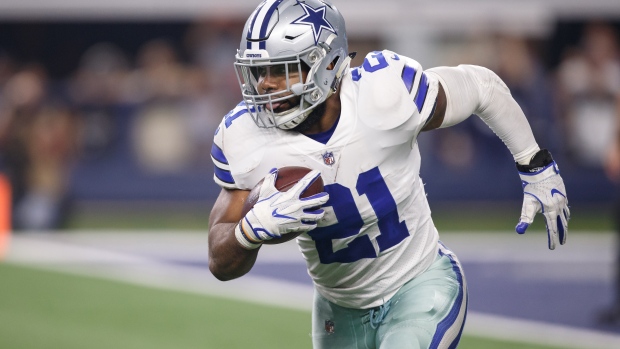 Ezekiel Elliott will not be suspended for an incident he was involved in in Las Vegas a couple months ago, the NFL announced Wednesday.

Elliott met with commissioner Roger Goodell Tuesday and vowed to avoid incidents similar to the recent one in Las Vegas.

Elliott tweeted Tuesday after meeting with Goodell in New York that he had "worked hard to make better decisions" but "failed to do that" during a music festival in May at Las Vegas Motor Speedway. Elliott was handcuffed but not arrested after police say he pushed a security guard to the ground.

Goodell suspended the two-time NFL rushing champion for six games in 2017 over domestic violence allegations, and the letter detailing the punishment warned Elliott to avoid future incidents with law enforcement. He is subject to suspension even though he wasn't arrested.

The 23-year-old Elliott wrote that he met with Goodell "to share with him what occurred in Las Vegas and what I have learned from that incident."

"I've worked hard to make better decisions and to live up to the high standards that are expected of me," Elliott wrote. "I failed to do that here and I made a poor decision."

Elliott wrote that he "meant it" when he apologized the night of the incident to Kyle Johnson, the person seen on a cellphone video falling over a parking barricade as Elliott runs into him. The video was obtained by the celebrity website TMZ.

Johnson later said he didn't think Elliott's apology was sincere. But Johnson didn't want to pursue what police said would have been misdemeanour battery charges, leading officers to release Elliott.

"I need to work harder to ensure I do not put myself in compromised situations in the future," Elliott wrote. "I am rededicating myself to use all of the resources that the league has made available. But in the end, it is up to me and I am determined not to be in this position again."

Elliott didn't speak to reporters during off-season practices or minicamp following the incident. The Cowboys have their first practice at training camp in California on July 27.