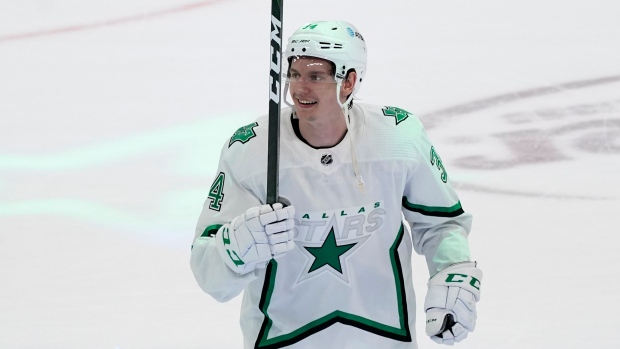 DALLAS — The Dallas Stars finally got another extra point after regulation, and it moved the defending Western Conference champions up in the standings in their late push to get back in the playoffs.

Denis Gurianov scored in the fifth round of a shootout for a 3-2 win over the Detroit Red Wings on Monday night.

“Honestly, it’s a huge relief,” said rookie Jason Robertson, who scored a goal in regulation before converting the first shootout attempt for Dallas. “I know that everyone in the locker room has been disappointed in the last few months about the points we've left on the table in the shootout.”

The Stars have earned points in a season-best seven games in a row (5-0-2), but they also have an NHL-high 12 overtime losses (six shootouts) this season. They had lost six in a row since mid-March when tied after regulation. Had they gotten the extra point in only a few of those, they could already be in playoff position.

“It was great to finally win a game in the shootout, lost too many as we all know,” coach Rick Bowness said.

Dallas moved into fifth place in the Central Division with 48 points, one ahead of Chicago, with 12 regular-season games left. Nashville is fourth with 51 points, but only nine games remaining. The top four teams make the post-season.

Roope Hintz had a goal and an assist for the Stars, and Miro Heiskanen assisted on both regulation goals.

Anton Khudobin stopped 20 shots before the shootout, including a glove save reaching around a defender with less than three minutes left in regulation.

“He made some key saves at the right time, as we’ve talked about all year, and his performance was very solid," Bowness said.

After Red Wings captain Dylan Larkin got a puck through Khudobin's legs in the first round of the tiebreaker, the Stars goalie stopped the next four attempts, including Filip Hronek's try after Gurianov had beaten Thomas Greiss at the other end.

Greiss finished with 34 saves, and both goalies had three in overtime.

Luke Glendening, with only three goals in his first 44 games and none since March 11, scored two tying goals for Detroit in the second period.

It was the first of four consecutive games this week between the teams, with another matchup Tuesday night in Dallas. Then they play in Detroit on Thursday and Saturday, when the Stars start a regular season-ending stretch with nine of their last 11 games on the road.

“I thought we competed hard. We tried to do it right defensively. We weren’t always perfect. We talked about playing a simple road game," Red Wings coach Jeff Blashill said. “I thought for the most part we did a pretty good job of that.”

The Red Wings, playing out the season after a series of trades earlier this month, were 31 of 33 on penalty kills in their previous 12 games before Hintz took a cross-ice pass from Heiskanen in the first period. Hintz did some nifty stick work before scoring Dallas' first power-play goal in five games.

“I was first looking ... was anybody open? I didn't see anyone, so I took a shot,” said Hintz, who has three goals and 10 assists during a six-game scoring streak.

Robertson scored his 13th for a 2-1 lead in the second period, poking in the puck while between Gustav Lindstrom and Greiss in front after Hintz's one-timer from the right circle.

Glendening had a quick backhand to score when Evgeny Svechnikov's shot ricocheted off Khudobin to tie the game at 1. Glendening later had his back to the net when he redirected Alex Biega's shot past and through defenceman John Klingberg and Khudobin to make it 2-all.

“It’s nice to help. They haven’t always come easy for me this year or last year, really,” Glendening said “So it’s nice to get a few. But it would have been a lot nicer if we could have gotten a W.”

Sam Gagner thought he had a go-ahead goal for the Red Wings about three minutes into the third period, but the on-ice official behind the net was immediately waving off the tally because of goalie interference. Vladislav Namestnikov was pushing into Khudobin in the crease.

Recently acquired Red Wings forward Jakub Vrana was scratched because of an illness not related to COVID-19. Vrana has played only two games since being traded from Washington, with winger Richard Panik and two draft choices, for forward Anthony Mantha. ... Detroit centre Robby Fabbri missed his eighth game in a row with an upper-body injury. ... Svechnikov had missed the previous two games with an upper-body injury.