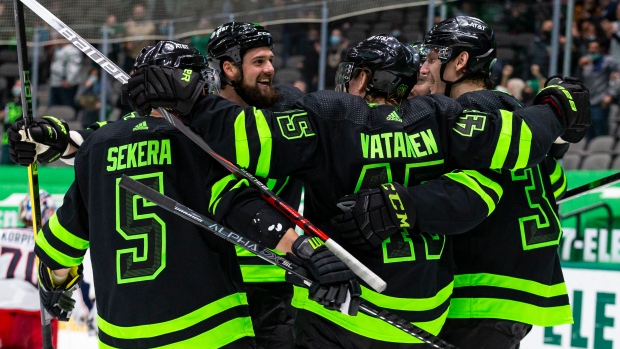 DALLAS — Joe Pavelski scored his team-high 18th goal of the season as one of five Dallas players with a goal and an assist, and the Stars scored four times in 6 1/2 minutes in the second period to beat the Columbus Blue Jackets 5-1 on Saturday night.

Denis Gurianov, Jamie Benn, John Klingberg and Esa Lindell also had a goal and an assist for the Stars, who are on a season-high six-game point streak (3-0-3) after sweeping two games from the Blue Jackets. Rookie goalie Jake Oettinger made 20 saves in improving to 5-0-1 this season against Columbus.

Dallas pulled within three points of the last playoff spot in the Central Division with 13 games to play. The Stars, who played in last season’s Stanley Cup Final, have chased that spot for most of the season after their first four games were postponed because of COVID-19 issues within the team.

“I don’t think until that final game when we have a playoff spot anyone’s going to feel good about themselves,” Pavelski said. “We’ve done our job lately.”

Vladislav Gavrikov scored for the Blue Jackets, who are 0-4-1 in their last five games and 2-10-2 in their last 14. Joonas Korpisalo was pulled after allowing four goals on 16 shots, three during a 3:24 span midway through the second.

Blue Jackets coach John Tortorella had little to say afterward. Asked if his team suffered again from poor situational awareness, which he cited after Thursday’s 4-1 loss at Dallas, or a lack of energy, Tortorella simply said, “Larger problems.”

After Gavrikov and Benn traded first-period goals, Gurianov began Dallas’ second-period barrage on a give-and-go with Benn at 10:10. A little more than 3 minutes later, Pavelski hit on a spinning backhander from the low slot. Klingberg scored another 20 seconds later when a puck deflected off sliding Blue Jackets defenceman Scott Harrington. After Elvis Merzlikins replaced Korpisalo, Lindell scored on a wrist shot from the high slot with 3:20 left.

“They made a couple mistakes, and we capitalized,” Dallas coach Rick Bowness said of the scoring flurry. “The puck went in. We’ve had other explosions and played just as well when the puck didn’t go in.”

Jason Robertson and Roope Hintz had two assists each. Robertson has 32 points and went into play second to Minnesota’s Kirill Kaprizov in rookie scoring.

Blue Jackets centre Max Domi drew a 10-minute misconduct penalty late in the second period, his second in three games, and didn’t play anymore after leaving the penalty box. When Tortorella was asked his thoughts on Domi, he said, “No thoughts.”

Gurianov had two goals and an assist Thursday and, with Saturday’s goal, has scored five of his nine goals this season against the Blue Jackets.

“That goal gave us a huge boost,” Bowness said of Gurianov’s goal, with the forward skating backward through the right circle and whacking a return pass from Benn.

With Dallas outscoring Columbus 4-1 in the second period, the Blue Jackets have been outscored 57-34 this season in the middle frame.

“I thought we played opposite of the first period,” Columbus wing Cam Atkinson said. “For whatever reason, we took our foot off the gas.”

Dallas won the season series 5-2-1. The Stars rallied from 1-0 deficits in these last two games to improve to 4-10-7 in games in which their opponents scored first. … Gavrikov’s goal was his second of the season, first since a game-winner on Jan. 23. … Benn has two goals and five assists in the last six games, when he was moved from wing to centre. … Blue Jackets defenceman Michael Del Zotto played his 700th regular-season game. … Attendance at American Airlines Center was 5,643, with the team recently being allowed by the NHL to increase its capacity based on market interest.

Blue Jackets: Start a back-to-back at Florida on Monday.

Stars: Also beginning a back-to-back on Monday, at home vs. Detroit.