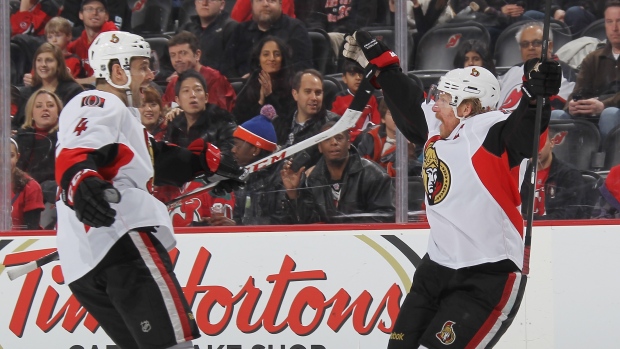 Daniel Alfredsson has not attended an Ottawa Senators home game in more than a calendar year.

But the franchise icon is going to make a return to Canadian Tire Centre on Tuesday night, when his long-time teammate Chris Phillips will have his No. 4 jersey retired to the rafters, where it will forever hang alongside Alfredsson’s No. 11.

While Alfredsson’s exact role in the pre-game ceremony is still being ironed out – he’s not expected to have a major speaking part – he wanted to be there in person to support Phillips.

Despite slipping out of the public eye following a second divorce with the hockey club in the summer of 2017, Alfredsson remains the franchise’s most beloved icon within the Senators fan base. At a time when the organization is trying to reconnect with those same fans, Alfredsson says it’s crucial that the teams he was a part of are celebrated and honoured with nights like the one they are hosting for Phillips.

“I think it’s very important. As a franchise, I think we were a big part of taking us from being a bottom team in the league to becoming a real consistent team that the community here could identify with,” Alfredsson said. “And it wasn’t just for three or four years. It was for 10 or 12 years that we were good all the time, under circumstances where pre-salary cap – we had a salary cap that was self-enforced. But we were able to compete with the bigger guys on a consistent basis and Chris was a huge part of that.”

Alfredsson became the first player in modern franchise history to have his jersey retired in an emotional ceremony in December of 2016. Phillips, Chris Neil and Erik Karlsson were part of the group who stood alongside Alfredsson on a red carpet as his jersey was raised to the rafters that evening.

Since Alfredsson has first-hand experience with seeing his own jersey retired, his advice to Phillips for Tuesday night is to be prepared for a sentimental evening that will stir up a lot of feelings.

“It’s going to be emotional for sure. I think it’s easier once you retire from hockey to appreciate these kinds of acknowledgments than when you’re playing, because you’re so focused on stepping onto the ice in 10 minutes and playing a game. Now you can take it in,” Alfredsson said. “For me, it was definitely one of the best experiences I’ve had in hockey. I wouldn’t compare it to your child’s birth because that’s way more significant, but it’s something you can’t plan for. People can tell you what to expect, but you have to go through it yourself to really understand it. You can’t prepare for it.”

Alfredsson and Phillips were cornerstones of a Senators team that was a perennial Stanley Cup contender for nearly a decade. Despite some soul-crushing losses in the playoffs, the group treated fans in this market to the best hockey they’ve ever witnessed.

With a little bit of hindsight and perspective, Alfredsson is proud of what the group accomplished, despite the lack of a Stanley Cup banner to hang alongside their retired jerseys.

“We had some ups and downs, but overall we experienced a lot of ups. We were consistently in the hunt for the championship and made the playoffs consistently,” Alfredsson said. “We also had a lot of drive within each other. We had different personalities that helped push each other and help each other throughout those years. A lot of good memories that come back – and fond ones.”

It was during the playoffs where Phillips earned his reputation as one of the game’s elite defenders. Alfredsson was on the ice with Phillips for 114 postseason games and said he saw the most out of the stay-at-home defenceman when the stakes were the highest.

“We always knew, in the regular season it was steady Philly and then come playoff time, it was a different Philly,” Alfredsson explained. “He always stepped up his game and did that little extra in the playoffs. And it wasn’t just one or two times, it was every time we were in the playoffs. He always excelled and he showed us what he could do.”

Phillips’ most memorable playoff moment came during Game 6 of the Eastern Conference final against the New Jersey Devils in 2003. Facing elimination on the road in overtime, Phillips swooped in from the point to bury a puck past Martin Brodeur to force a Game 7 and keep the Senators season alive. The scene of teammates piling on Phillips near the bench remains one of the most indelible images seared in the collective minds of Sens fans.

Alfredsson says Phillips had a penchant for rising to the occasion when the situation called for it, like it did that night in New Jersey.

“In the big moments, it was almost like it triggered a different reaction for him,” Alfredsson said. “I wouldn’t say he got bored with the regular season games, but he just went out and did his job. And then when the spotlight was on, it was like he had a little something extra.”

While Phillips played with a number of defence partners during his 17 seasons in Ottawa, he is most closely associated with Anton Volchenkov. The duo earned the reputation of being one of the most reliable, physical defensive pairs in the league when the Senators advanced to the Stanley Cup Final in 2007.

“They were both selfless. They did everything they can to help the team first,” Alfredsson said of the Phillips-Volchenkov pairing.

While Phillips carved out a niche as a reliable, stay-at-home defenceman, Alfredsson says he had an underrated offensive element to his game. Selected first overall by the Senators in the 1996 draft, the club struggled to find a home for him – even experimenting with him as a forward in the early part of his career.

But Alfredsson believes Phillips made a conscious decision to temper his offensive game in order to focus on becoming an elite defender.

“He had it in him, but he took so much pride in being that shutdown guy that he put that to the side a bit,” Alfredsson explained. “It couldn’t have been easy for a lot of guys in that position, being drafted first overall – and just getting chances here and there. But then he said, ‘Okay, this is what I am now,’ and he became the absolute best at it and became one hell of a team player.”

While Alfredsson owns virtually every meaningful statistical record in franchise history, there is one mark where Phillips has the edge on him. When Phillips suited up for his final game on Feb. 5, 2015, it was his 1,179th game with Ottawa – allowing him to move past Alfredsson for the record of most games played by a member of the Senators.

That fact does come up from time to time when the two ex-teammates are texting with each other.

“He teased me a few times, but it’s all in good fun,” laughs Alfredsson. “We respect each other and we’re good friends. I’m happy for him. It’s not a record like I was looking to come back and play a couple of games late in my career. But it comes up once in a while.”