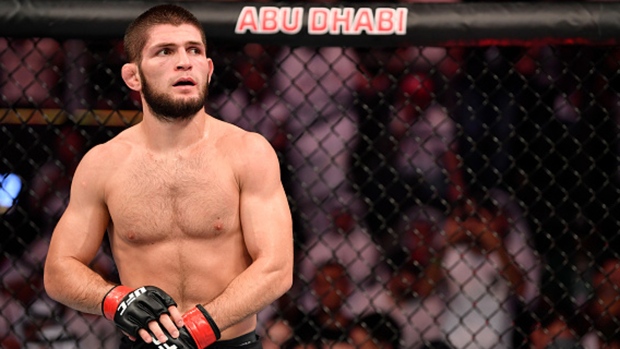 Khabib Nurmagomedov defended his UFC lightweight championship with a victory over Justin Gaethje Saturday night at UFC 254 in Abu Dhabi by finishing the American with a triangle choke in the second round.

According to former fighter and current analyst Daniel Cormier, Nurmagomedov went with the choke instead of the armbar he was originally set up for to end the fight out of compassion and not seriously injure Gaethje.

"He told me when he was watching the interviews over the course of the week, he saw that Justin said that he would never tap," Cormier told ESPN's Ariel Helwani on the DC & Helwani program. "He was going to do the armbar, but he had heard Justin saying all week that he would never tap, and he didn't want to hurt him in front of his parents. So he went to the triangle and just kind of put him to sleep."

Gaethje's parents were in attendance at the fight in Abu Dhabi Saturday.

"If I put him to sleep," Cormier told ESPN Nurmagomedov said to him, "he'll wake up and everything will be okay."

That's what happened as Gaethje showed no signs of serious injury once coming to after the referee called a stop to the fight.

Nurmagomedov moved to 29-0 with the victory and then surprisingly announced his retirement in a post-fight interview. The lightweight champion's father and primary coach, Abdulmanap Nurmagomedov, died in July from a heart complication complicated by COVID-19.

Cormier believes the Russian fighter is done for good.

“This is my last fight,” Nurmagomedov said. "There’s no way I’m going to be back without my father. I spoke to my mother. She don’t know how I fight without father, but I promised it’s going to be my last fight, and if I give my word, I have to follow it.”