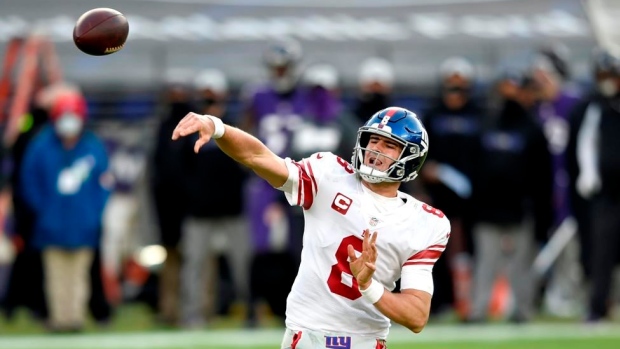 Watch the game LIVE across the TSN Network and TSN Direct with coverage starting at 7:30pm ET/4:30pm PT.

The 24-year-old is coming off a loss to the Denver Broncos where he threw for 267 yards and one touchdown. However, against the Washington Football Team, Jones has been dominant, starting his career off with a 4-0 record against them.

Jones is looking to join Matthew Stafford, Matt Ryan, Brett Favre, and Danny White as the fifth quarterback in the Super Bowl era to win his first five starts against Washington.

In Jones’ first four victories, he has a completion percentage of 68, with eight touchdowns and three interceptions.

On the other side of the coin, Jones has struggled mightily in prime-time games throughout his career. The Charlotte, NC. native is 0-5 when the spotlight is firmly on his team and a sixth loss would match the longest prime-time loss streak with Archie Manning, Rick Mirer, Trent Green, and Ty Detmer.

Tonight, Jones will either continue his dominance over the Washington Football Team or continue to shrink in the limelight of prime time.

The Giants have also struggled on Thursday nights, where they haven’t won a game since 2015. That isn’t a good sign for a team looking to avoid going 0-2 for a fifth consecutive season. However, the good news for the Jones and the Giants is that the last Thursday night win happened to come against the Washington Football Team.

Washington is coming off a 20-16 loss to the Los Angeles Chargers on Sunday, where they also lost starting quarterback Ryan Fitzpatrick to injury. Taylor Heinicke will be making his third career start (including playoffs) against the Giants and second as a member of Washington.

Heinicke threw for 122 passing yards against the Chargers and had one touchdown in relief of Fitzpatrick. In his short career, Heinicke has never thrown more than one touchdown in a season.

The Washington Football Team is looking to avoid their third 0-2 start in the past six seasons, the last occurring in 2019 where they went on to a 3-13 record.