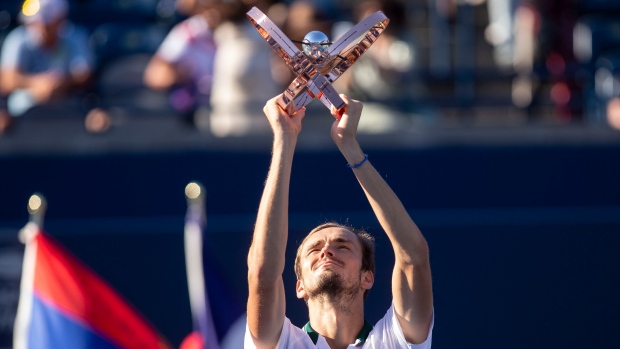 Russia’s Daniil Medvedev has won the men’s title at the National Bank Open in Toronto with a 6-4, 6-3 win over American qualifier Reilly Opelka.

The tournament’s No. 1 seed, Medvedev saved 4-of-4 break points and won 73 per cent of his total service points in the one-hour, 25-minute match on Sunday.

The six-foot-11 Opelka, playing in his first-ever ATP Masters 1000 final, couldn’t dominate the game with his booming serve, winning 63 per cent of his first service points with eight aces and three double faults.

Medvedev, 25, previously made it to the tournament’s final in 2019 when the event was known as the Rogers Cup but lost to Spanish tennis legend Rafael Nadal in straight sets.

Canadian Gabriela Dabrowski and partner Luisa Stefani of Brazil took the women’s doubles title with a 6-2, 6-3 victory over Croatia’s Darija Jurak and Andreja Klepac of Slovenia.

Medvedev, the world No. 2, played much of the match from well below the baseline in order to respond to Opelka’s massive serve.

The Russian faced a triple break point early in the first set Sunday but saved all three, coming back from 0-40 to hold serve at 2-2.

Opelka was broken in the next game when Medvedev sent a giant bomb down the line.

The 23-year-old American, ranked No. 32 in the world, held on despite other potential breaks in the set, but couldn’t solve his opponent and dropped the opener 6-4.

He faced another break in the first game of the second set after Medvedev put another forehand shot straight down the line, but Opelka held on for the save.

A double fault gave Medvedev the break on Opelka’s next serve and the Russian went up 2-1.

Midway through the second set, it was Medvedev who faced a break. Opelka seemed for a moment poised to finally have a chance until he sent a return just wide, and Medvedev held serve to make it 4-2.

He sealed the victory by breaking Opelka once again, with the American sending a return into the top of the net.

At the women’s tournament in Montreal, Giorgi used her speed and athleticism to win a title in her first-ever appearance in a WTA 1000 final.

The 29-year-old Italian, currently ranked No. 71 in the world, won 71 per cent of her first service points and hitting seven aces.

The Italian took out No. 9-seed Elise Mertens in the first round, dispatched Petra Kvitova, the No. 7 seed, in the round of 16, and beat No.-15 seed Cori Gauff in the quarterfinals.

Pliskova faced a break point after sending a shot into the net and got the save, only to see Giorgi repeatedly win the point back. The Italian eventually got the break to go up 4-3. Pliskova responded by throwing her racket to the court.

After having her serve broken, Pliskova missed a number of returns and double faulted to set up a double-break point and potential set point. She saved the first with a massive serve, then sent a return out of play, giving Giorgi a 6-3 win.

It was the first set Pliskova had lost since the tournament’s second round when she went down 6-4 to Croatia’s Donna Vekic en route to a three-set victory.

Giorgi was the one showing her frustration in the second set, though, tossing her racket into the net after sending a shot wide.

She forced Pliskova into a break point on the next point, winning it and going up 3-1 when the Czech player missed a return.

Giorgi was broken right back in the next game following back-to-back double faults.

A missed Pliskova forehand gave Giorgi a chance for the match point, but Pliskova got the save when Giorgi sent a return into the net. Giorgi didn’t miss her second opportunity and broke her opponent to take the set 7-5.

Tears welled in her eyes as she saluted the crowd with a raised racket.

This report by The Canadian Press was first published Aug. 15, 2021.