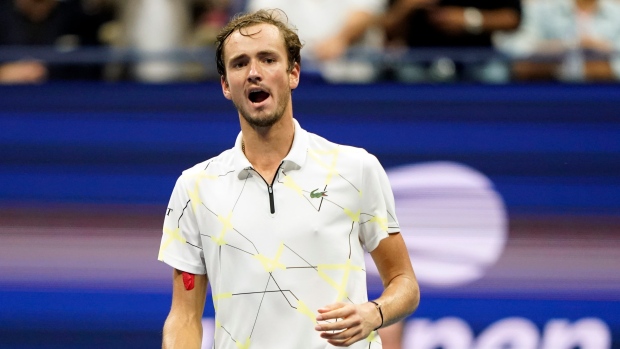 MARSEILLE, France — Daniil Medvedev's coach wasn't impressed with the Russian's attitude against Jannik Sinner in the second round of the Open 13 on Thursday.

The top-seeded Medvedev rallied to beat the 18-year-old Italian 1-6, 6-1, 6-2 and reach the quarterfinals, but his performance in the first set exasperated coach Gilles Cervara so much he left the team box.

“When I see Daniil with that kind of attitude, that energy during the first set, crying over all the lost points, it annoys me,” Cervara told sports daily L'Equipe. “I told myself, ‘He has to react. Either it’s him or it's me.' It was me. I didn't want to support that behaviour at that point, knowing that if he carried on like that he was heading straight into a wall.”

Medvedev, who launched an astonishing comeback in last year's U.S. Open final before losing to Rafael Nadal in the fifth set, also had a temper tantrum at the year-ending ATP Finals in November.

He led Nadal 5-1 with match point in the third set of their round-robin match before capitulating, remonstrating wild-eyed to his box, ranting at himself, and theatrically swishing his racket through the air in anger as victory slipped away.

“At some point, there are things which are not consistent with his level and his age,” Cervara said of the fifth-ranked Russian, who won two Masters tournaments and four titles overall in a breakthrough 2019 season.

Cervara said he hoped that by walking away this time, it would sting Medvedev into action.

“I secretely hoped it would make him react,” Cervara said. “I didn't want to wait any longer ... I remember once in Cincinnati where we shouted at each other on the side of the court. This time, I just got up."

The 24-year-old Medvedev would not have blamed Cervara if he'd gone back to the hotel.

“With my behaviour on the court, even if my entire box had left I would have said ‘OK.’ He was right,” said Medvedev, who has seven career titles. “At the same time, it enabled me to get my good energy back. Because afterwards I didn't say a word.”

He next faces French veteran Gilles Simon, who won their two previous meetings. Simon advanced with a 7-6 (6), 6-4 win against Aljaž Bedene.

Auger-Aliassime, who saved two match points in the first round, next plays Egor Gerasimov. The qualifier from Belarus upset No. 3 David Goffin 6-4, 7-6 (5).

Vasek Pospisil was already through to Friday's quarterfinals, where he faces No. 2 and defending champion Stefanos Tsitsipas.

It's the first time three Canadians have reached the last eight of an ATP Tour event since 1990.